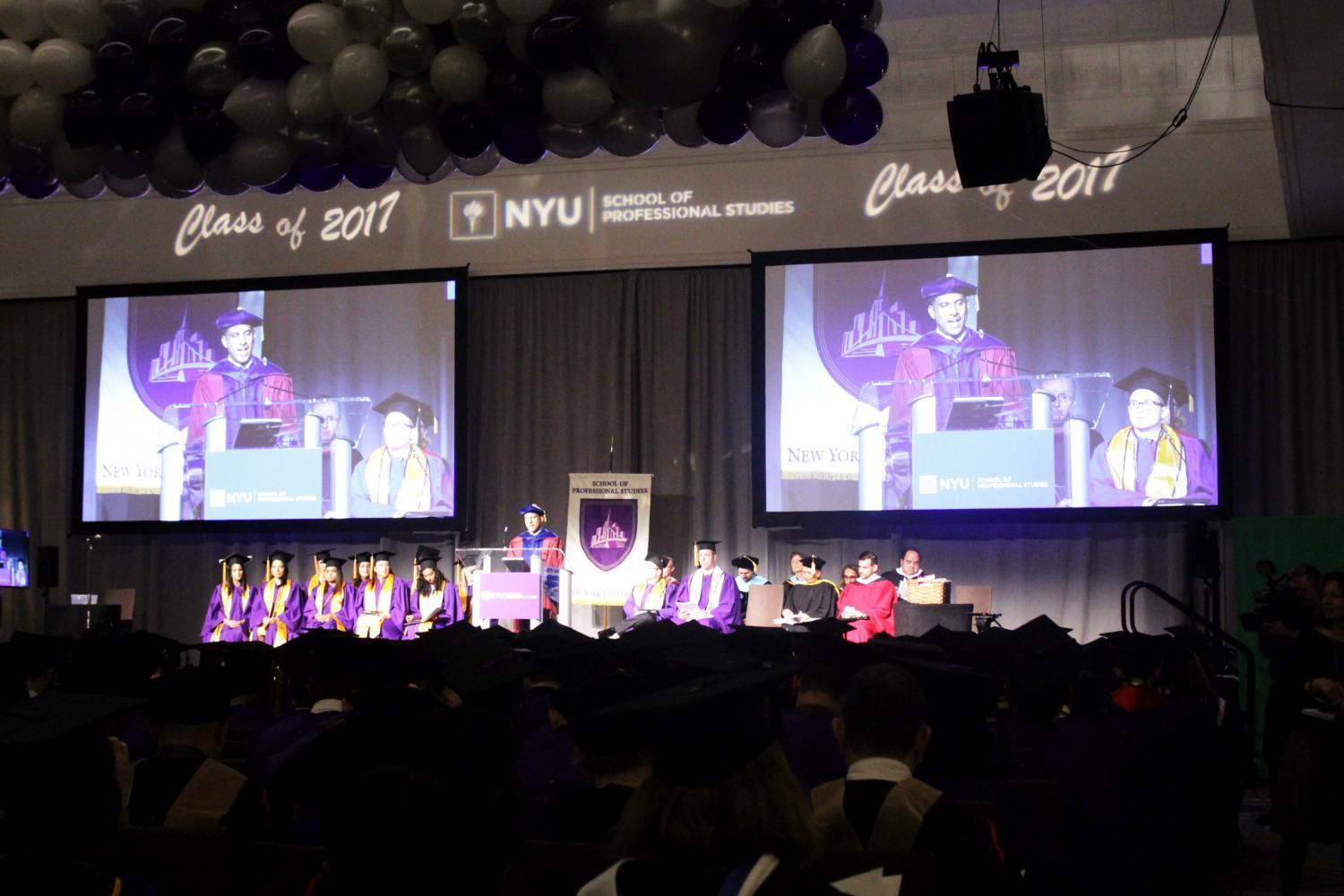 Monitors projected the best memories of the School of Professional Studies class of 2017 during their time at NYU, from Art For Change to the 2017 President’s Service Awards. The hashtag #WeAreSPS adorned an assortment of t-shirts and banners. Violet, white and silver balloons hung over the seats of the graduating class, waiting to be released and perfectly capturing the anticipation which filled the space. One by one the members of the Class of 2017 filed into the Grand Hyatt’s ballroom to the beat of “Pomp and Circumstance” Monday morning for the SPS Undergraduate Convocation.

The Harvey J. Stedman Dean of SPS Dennis Di Lorenzo was greeted with thunderous applause at the beginning of his welcome. Following his opening, he honored faculty members and student council representatives and recognized each member of the inaugural group of Dean Scholars representing the undergrad class. All 12 of these excellent students earned praise for enthusiastically devoting their time to serve as mentors to inner city high school students.

“We are better here at SPS for their efforts,” Di Lorenzo said.

Convocation speaker Alexis Herman, Chair and Chief Executive of New Ventures and the first African-American to serve as the Secretary of Labor during the Clinton Administration, was next to grace the stage. Herman claimed a good friend once gave her useful advice.

“Good commencement speeches should have a good beginning and a good ending,” Herman said. “And the two should be as close together as possible.”

That zinger led to Herman’s point that everyone has different goals. She said that every student was united by the same courage and commitment to chase their dreams. She gave three tips — stay informed, stay connected and stay encouraged — for the rest of the graduates’ lives.

“There’s a reason they call it a commencement,” Herman said. “This is only the beginning.”

As a final thought, Herman advised the graduates to build bridges and not walls, because every barrier built not only locks others out but locks them in.

Student speaker Reed Alexander Hodkin, notable for his role as Nevel Papperman on the Nickelodeon television show “iCarly,” kicked off his speech in true millennial fashion by taking a quick video of his fellow graduates and instructing them to be as loud as possible. He joked that the gimmick was better than the random dancing seen on “iCarly,” a bittersweet reference to the childhood series. Hodkin then pondered how the path of each graduate will unfold, explaining that despite individual uncertainty, one thing would unite them all.

“Our choices have one common underpinning,” Hodkin said. “We will all be striving for success.”

A prominent children’s health advocate who has written a successful cookbook, Hodkin described how he was gifted a cookbook of wisdom from his mom as a graduation present with pieces of advice from the most cherished people in his life, one of whom is Kathie Lee Gifford. Hodkin shared a quote from Gifford, “Find something you love to do, and then find a way to get paid for it.” He concluded his speech with, “I wish you all only prosperity and achievement in everything you do.”

The presentation of candidates for degrees followed, and Di Lorenzo once again took center stage for the Dean’s Remarks after the diplomas had all been handed out. He talked about a ritual he shares with his 13-year-old son when he drives him to school in which they listen to a variety of songs and deconstruct the lyrics. Once, while listening to the first verse of “I Had A Dream” by Kelly Clarkson, in which she sings, “Everything you do is gonna add up / It’s what you asked for / So don’t get mad when it’s not what you thought,” his son asked if he had ever been made that he got what he wanted. Di Lorenzo noted we always have our sights set on what we want, but we rarely think about what we’ll do once we get it.

Di Lorenzo’s final advice to the SPS Undergraduate Class of 2017 was to take pride in their accomplishments and stake their claim today. But tomorrow would be reserved for reflective openness to foster change and acceptance. He also finally revealed what his response to his son was.

“I learned not to expect what I expected,” Di Lorenzo said. “I learned to reflect and listen.”