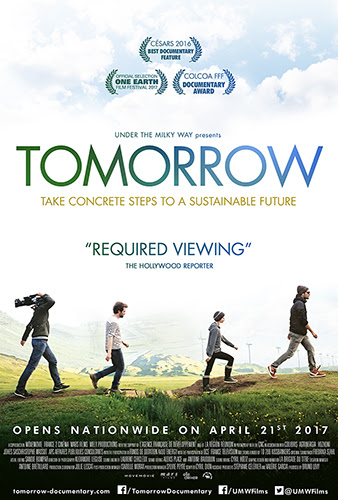 “Tomorrow,” a film directed by Cyril Dion and Melanie Laurent, highlights the warnings of climate change and how people can fix it. “Tomorrow” opens at the Village East Cinema at 181-189 Second Ave. Friday, April 21.

Despite warnings of climate change, there is an alarming lack of policies that reflect the concerns for the destruction of our planet. “Tomorrow,” directed by Cyril Dion and Melanie Laurent, is a French documentary that takes a lighter approach to such a dark issue to show what societies can do to make a difference.

The filmmakers start with an example of how the U.S. media focuses on species extinction rather than making films or series that show humanity chasing their habits to reverse or deter climate change. By using uplifting music and cute animations, they effectively create a documentary created to keep the audience positive.

Sticking to cost-efficient production measures, “Tomorrow” shows how important communities and big cities can be in effecting change. It explores a whole range of places, including the United States, France, the United Kingdom, Denmark, Iceland, Finland and India. The film discusses food shortages, alternative energy, the economy, democracy and finally education. The documentary covers the most important parts of adapting society to reduce planetary damage.

According to the film, small farms’ agricultural productivity is actually much more effective in terms of carbon footprints than industrial farming. When it comes to energy, Denmark is an example of a country where using non-fossil fuel energy saves money overall — whether via solar panels, wind turbines or geothermal energy. The documentary also emphasizes the importance of local economy and small businesses, which is strengthened by many of these eco-friendly techniques used for energy and food.

“Tomorrow” also focuses on democracy’s role in addressing climate change. The film discusses Iceland, which once had a very corrupt government, but the nation turned a new leaf. This is the type of behavior all societies should emulate when trying to fix climate change. The theme of connection in a community, small or large, flows throughout the entirety of the film.

Education is the most central theme in the documentary. Empowering people with knowledge is crucial to a positive future. In Finland, there is no standardized testing, and the system is setup to really inspire children to learn and be motivated — unlike the U.S. education system.

Despite the gloomy truth about global warming and political corruption, “Tomorrow” stays optimistic about the incredible things factories and communities are doing and hope that the film will inspire others to follow in their footsteps. Ultimately, humans fear change. Concern about climate change’s impact on the world can be overpowering, which is why it’s so important to not lose hope. Although corny, the conclusion of the “Tomorrow” shows a heartwarming ending, emphasizing the importance of people working together.