Jimmy Martinelli: Rookie of the Year 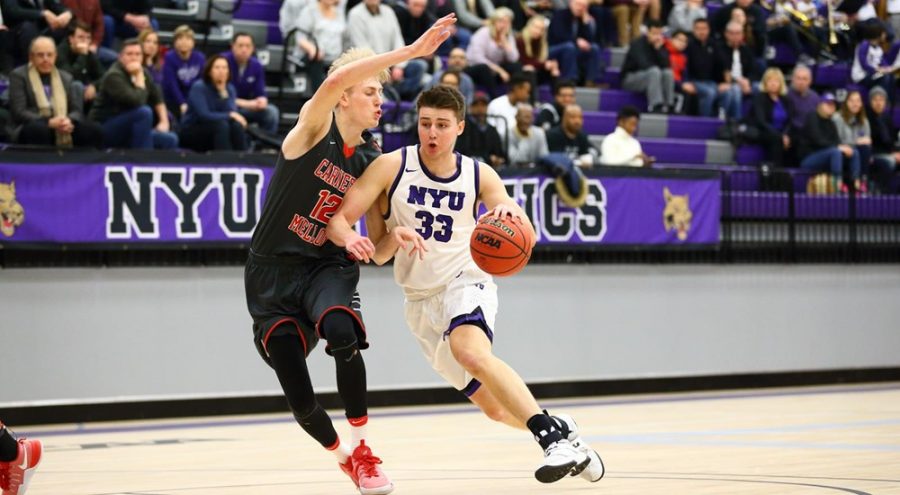 Jimmy Martinelli defends against the University of Rochester, Jan. 27. Martinelli was recently named Rookie of the Year by the UAA.

Being recognized for one’s performance is always a rewarding experience for college athletes. It takes some players several seasons to be acknowledged by the UAA or the ECAC, an organization that keeps track of teams throughout the eastern region. However, freshman basketball forward Jimmy Martinelli was recently awarded one of the highest honors a first-year can receive: UAA Rookie of the Year.

Originally from Glenview, Ill., Martinelli was named team MVP his senior year of high school basketball and started every game for the Violets this season. Despite some early season nerves, it didn’t take long for him to adjust to the college game.

“Before my first game I was a bit nervous and had some butterflies during warmups,” Martinelli said. “But usually, once I start playing in a game, I become so focused that I lose all nerves and just go out and play. That’s what happened, and I made my first shot that I took in my college career, which was awesome. After the game, I just felt relieved and also excited that I had won my first college game ever.”

Martinelli played a significant amount of minutes this season, especially for a freshman, averaging 29.8 minutes and 8.9 points per game.

“[Playing time] was something I somewhat expected because a lot of seniors graduated the year prior and the coaches told me that I would be playing a lot right away,” Martinelli said. “In the summer and off-season I trained and prepared for the season harder than I had ever before. It was good to get some experience under my belt and now our team knows what it takes to win games in our ultra-competitive league.”

While he had expected an increased amount of playing time coming in, when Martinelli found out he’d earned the Rookie of the Year award , he was surprised.

“It was an awesome feeling knowing that all of the hard work that I have put in ended up paying off.Obviously, this could not have been possible without the help of my teammates, coaches and family as well. Individual awards are great, but I am in this for the team accomplishments that will hopefully come in the upcoming future.”

Both his teammates and coaches are grateful for the presence that Martinelli has on the court. Senior guard and captain Joe Timmes noted Martinelli’s drive and hard work.

“From day one, Jimmy came in with a tremendous work ethic,” Timmes said. “I would always find him in the gym getting extra work in, whether it was shooting after practice or lifting in the hotel on road trips. I fed off that sort of extra effort. I loved it. Jimmy’s impact can’t be understood by just looking at the box score or by one award. He played relentlessly and with such fire — day in and day out.  He is and will be a tremendous asset for the program in years to come.”

Assistant coach Taylor Roth believes that Martinelli will continue to progress as a player as he gains more experience.

“One of Jimmy’s greatest strengths is his consistency both with his play and his effort,” Roth said. “When you have some natural ability combined with a consistent work ethic, then this is the result.  He still has a lot to improve on going forward, but he had an excellent freshman year and I’m looking forward to seeing how he progresses going into next season.”

Martinelli will surely be a player to watch on NYU basketball and throughout the UAA. While the season has ended, he already has high hopes for the years to come.

“Our team has a lot of talent, and our potential is limitless in my opinion,” Martinelli said. “I am really excited for the future and to show everyone what we can do.”

A version of this article appeared in the Monday, March 20 print edition.