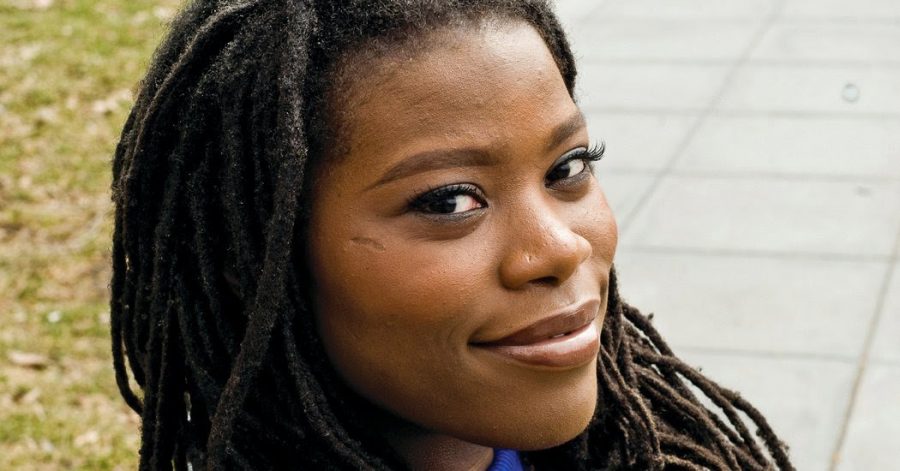 Kaitlyn Greenidge, above, read at the Lillian Vernon Creative Writers House with David Means on March 2. Both writers grapple with uneasy images of America in the debut novels from which they read.

Attendance for events at the Lillian Vernon Creative Writers House can range from fire-hazard standards to intimate and comfortable crowds. Where Anne Carson and Joyce Carol Oates drew the former last semester, Kaitlyn Greenidge and Dave Means’ reading on March 2 drew the latter. Both read from their electric debut novels, and together they provided a weird and wonderful view of life in America through their inventive and unique prose. Each of their off-kilter universes stunned the crowd into rapt silence throughout the evening.

Greenidge read first and opened with the epilogue of her award-winning novel “We Love You Charlie Freeman.” It tells the story of a black family who moves to the predominantly white neighborhoods of rural Massachusetts to adopt a chimpanzee, Charlie, for a scientific experiment. The epilogue, which was originally intended as a prologue, takes place long after the events of the novel. It is a slow-burning excerpt from the perspective of Charlotte, one of the family’s two daughters.

The effects of the experiment on the family many years after its conclusion are mysterious and grim, with gloomy narration leaving a hundred questions in its wake. Greenidge’s authorial voice is compelling and intense, and she endows each character with a rich humanity that shines through the alienation of the epilogue. When such a brief sliver of the book offers such intensity, one can only imagine the sheer force of the entire novel.

Means followed the gripping conversation with a discussion on his first novel, “Hystopia.” In his speculative work, John F. Kennedy served three terms as President of the United States and founded a government agency called the Psych Corps — an organization that focuses on post-traumatic stress disorder and other mental disorders among soldiers. The book is written from the point of view of a Vietnam veteran, Eugene Allen, whose life is told through fragments of interviews with his family members — who are sometimes based off of Means’ real family — and through notes left throughout the novel.

If this sounds baffling, it should — the novel is purposefully sprawling, plot-heavy and dense. It is an homage to the massive postmodern times of the 1980s and the counterculture of the ‘60s. Means’ selections included various interviews and a chapter from the novel-within-a-novel following Kennedy’s assassination in his third term. These excerpts served as tantalizing glimpses into the strange, psychedelic planet of “Hystopia,” preoccupied with chemical transformations, crude sex and death and the occasional flash of metaphysical brilliance.

To some degree, the novels share a focus on America, a country that is arguably best depicted through the obscurity of “Hystopia” or the discomfort of “We Love You, Charlie Freeman.” Unable to find roots in a time or place, unease grips the characters through both writers’ masterful depictions.