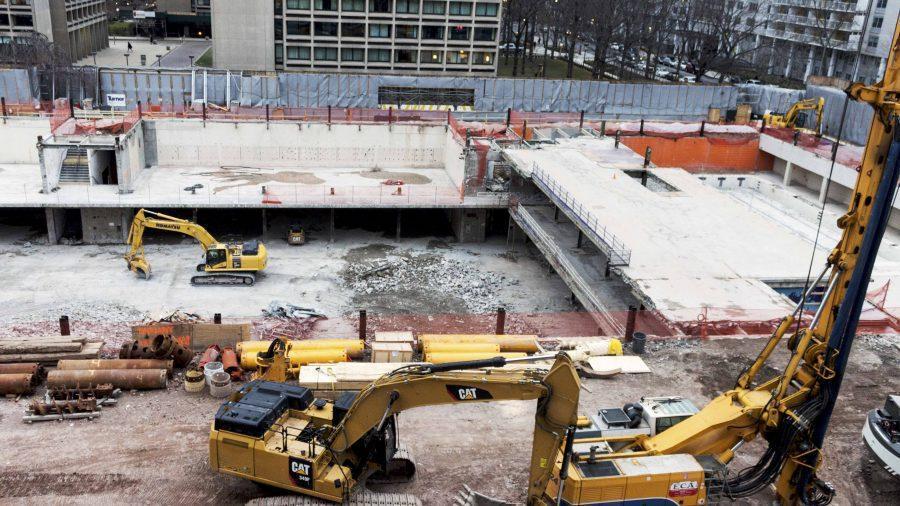 NYU’s 2031 expansion plan is finally underway with the beginning of construction at 181 Mercer. Many students are optimistic for the new facility, but some question its role in the gentrification of the neighbourhood.

Demolition and excavation began at 181 Mercer St. on Feb. 15 as the university got to work on the $1.29 billion multipurpose facility that will replace the Jerome S. Coles Sports and Recreation Center. This will also be the first project in NYU’s 2031 expansion plan — a groundwork for the gradual possession of land by NYU for academic use, student services and accessible housing.

It has been nearly three months since President Andrew Hamilton sent an update on the progress of the project. Specific designs for the building were released during a University Senate meeting on Dec. 8 last year, and students can now see renderings of what the giant glass building will look like once completed.

“This new building will provide a range of needed technical spaces, allowing us to decompress other overburdened buildings and to enhance the quality of the education we offer,” Hamilton said in the December press release. “I know that this has been the subject of much debate over the past several years. I hope that these continuing updates will underscore what a worthwhile and beneficial project this is for NYU, and its importance in helping fulfill our academic mission.”

Before the construction is complete, students can receive updates from the university about the construction progress. The building will include housing for students and faculty, theaters, additional classrooms and a fourth university athletic facility, according to the project’s website.

However, there has been some backlash in response to this project from local neighborhood associations, such as the Greenwich Village Society for Historic Preservation. Executive Director of the GVSHP Andrew Berman said that the organization is strongly opposed to the NYU 2031 plan, including the 181 Mercer St. project.

“We certainly think it’s out of scale, and it will be really destructive to the character of the neighborhood,” Berman said. “It will have a huge impact on the surrounding area because it’s almost a million square feet, so there’s going to be an enormous volume of people coming in and out.”

Berman also said that the design of 181 Mercer makes no attempt to relate to either the historic buildings around it or even to the post-war apartment buildings next door, which were designed to be surrounded by smaller buildings. He said that projects like 181 Mercer are made possible because of NYU’s power within the city.

“The board of NYU is [one] of the most well-connected and powerful business and industry leaders anywhere in the country,” Berman said. “They clearly lobbied very hard and used every connection that they had in order to get approval for the plan, and the university spent thousands and thousands of dollars on lobbying — resources that the community simply did not have.”

Berman said that the organization believes that the university’s administration is making the wrong decision by proceeding with the project. He said that he was recently invited to speak to an NYU class about this issue and found a lot of students agreed with the GVSHP.

“Every major editorial board in this city, the City Planning Commission, the City Council, the mayor and the highest courts in New York State all overwhelmingly endorsed this project,” Nagel said. “The most reasonable conclusion to draw is what we have said all along — that this is a sound, thoughtful, worthwhile project, one that is important for the University and that takes account of neighborhood concerns.”

Students such as CAS freshman Hillary Gao also see drawbacks in the development of 181 Mercer. Gao said that although creating more options for study spaces would be beneficial, the university could spend the money differently.

“I think the construction is pretty interesting — I often find myself in need of either study rooms or lounges of the sort [that] are often pretty crowded, so I think the additional space would be quite the benefit,” Gao said. “Unfortunately, I’m not sure if this is the best way for NYU to spend its money, not that I want to tell them what to do.”

Nonetheless, Gao said she hopes that once construction is completed 181 Mercer will provide a space for NYU students to spend time between classes. She thinks that the common areas in the new building could have potentially encourage the formation of new relationships between students.

Tisch junior Mariah Qaiser said that she is also hopeful about the future possibilities of this project. She believes 181 Mercer could potentially serve as a social hub for the NYU community, as the university’s dispersed campus can often make it difficult to establish a place for people to connect.

“I think the construction of this new facility is exciting,” Qaiser said. “The preliminary sketches and artwork of the building really build the anticipation for the facility as a whole and I think this is something great for the NYU community to look forward to, ultimately.”

Qaiser also thinks that the building’s construction is exceptionally progressive, especially in its intention to provide creative spaces for performing arts programs. She hopes that 181 Mercer will contribute to NYU’s ongoing growth.

“As a university, I think it’s very important to continue to expand for the sake of the community,” Qaiser said. “I personally believe that 181 Mercer St. will augment convenience to students and faculty alike as well as increase the ease of getting around the city environment of the university as a whole. I hope to see this new facility become a central and symbolic structure of NYU.”