At Fusion Film Fest, HBO Encourages Confidence, Passion and Having a Voice 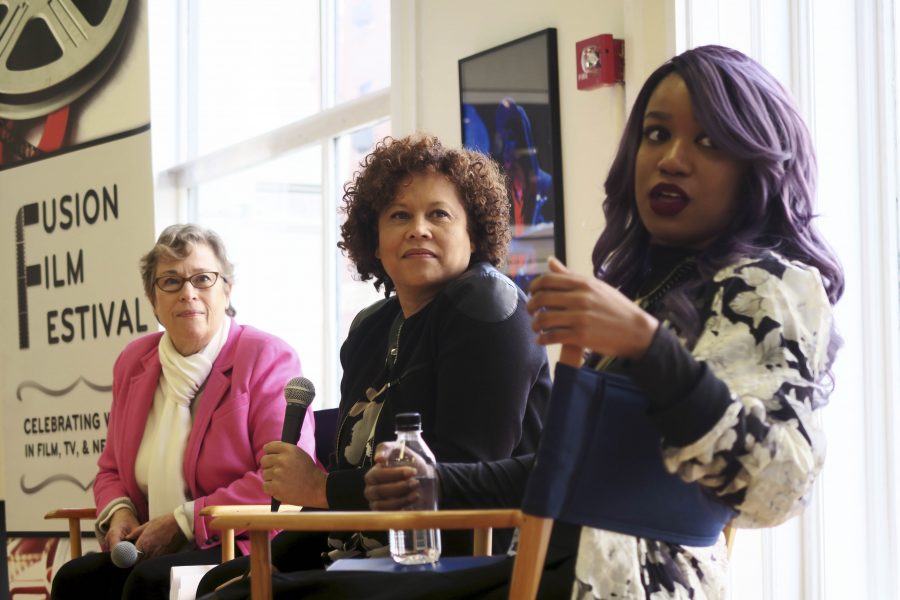 From left to right, Susan Sandler, Kelly Edwards and Vanessa Benton discussed the issues of diversity in the entertainment industry at the Brunch with an Icon event on Saturday. The brunch was one of the many events hosted by the Fusion Film Festival.

For the last 15 years, the Fusion Film Festival has been bringing the NYU community together for three days of screenings, panels and master classes celebrating women in film, television and new media.The guest of honor for this year’s “Brunch With an Icon” event was Kelly Edwards, head of talent development for HBO and co-founder of Color TV. Edwards was joined by Tisch Academic Director Susan Sandler and Tisch alum Vanessa Benton, who is currently employed with ABC’s “How to Get Away With Murder.”

With the incredible confidence Edwards exuded, it was shocking when she admitted to struggling with shyness growing up. As a middle-schooler, she had to take a speech class so she could have the confidence and public speaking skills to eventually pursue her degree in theater at Vassar College. She recalled her partner at Paramount Pictures, who used to speak over her until she learned to talk louder. Edwards offered advice for any woman who might find herself in similar situations.

“When people yell at you, yell back,” Edwards said. “When they come at you, don’t shrink up and go back to the office.”

Tisch alum Cece Torez, who graduated from the Film and Television program last May, found this portion of the talk most inspiring.

“[Edwards] helped us all look towards tapping into our own confidence and [assured] us that getting our own voices out there is important,” Torez said.

Edwards also advised writers to steer clear from the generic and to not be afraid to tell their important, meaningful stories.

“Inside of all of us, there is that story we’re afraid to tell,” Edwards said. “Tell it.”

A member of the audience asked the three women what they did to de-stress after working in an emotionally and physically taxing field that can oftentimes be extremely stressful. Benton highlighted the importance of finding a group of people one can vent to and Sandler expressed her love for baths. Edwards provided the most unusual response. She left the audience giggling as she expressed her love for the zombie levels of the video game “Black Ops 3” and a sensory-deprivation tank procedure called floating.

At one point during the event, Edwards spoke about the struggle to increase diversity in film and television. Edwards noted that there is still a long way to go.

Edwards claimed that she has always been that person in the room speaking out about diversity and challenging executives when they only hired white people. She hopes that eventually there will be no need for her position as diversity executive. But until then, she remains dedicated.

“We are going to have to be that friction,” Edwards said. “I wish I didn’t have to do it. But I’m going to do it.”

Edwards reminded everyone not to limit their dreams to acquiring a specific position.

“The job you think you want doesn’t actually exist today,” Edwards said. “You might be in a world that hasn’t even been created yet.”