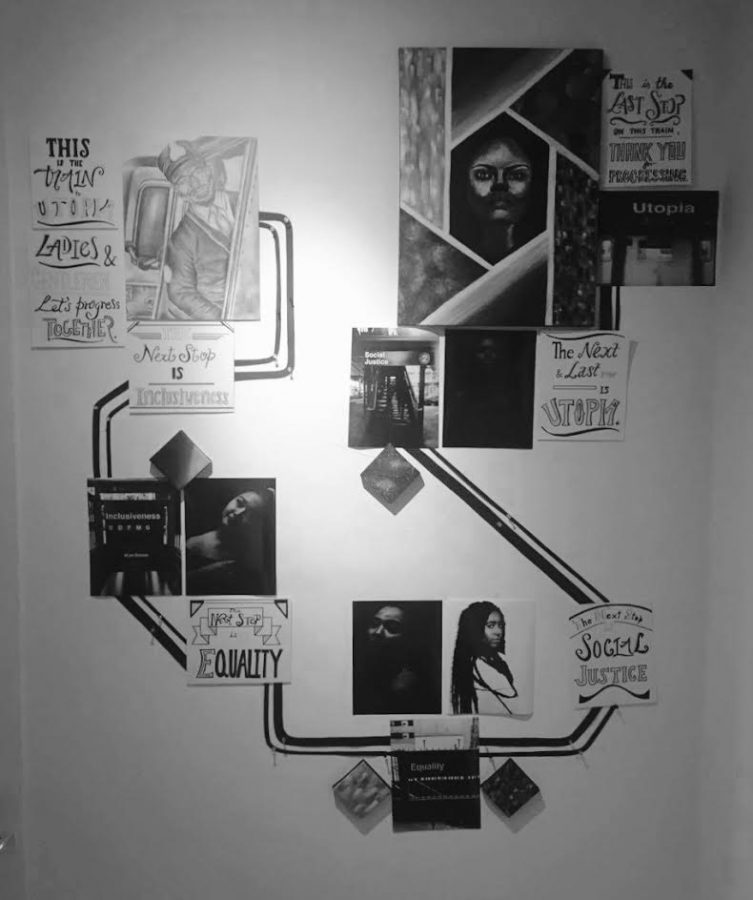 The NYU Steinhardt Department of Art and Arts Professions opened its new exhibit, “jux-ta-po-si-tion,” on Feb. 15 for Black History Month.

Amidst buzz about multiculturalism in the fine art world, the African American faculty, staff, alumni and students of the NYU Steinhardt Department of Art and Art Professions opened a new exhibition called “jux-ta-po-si-tion” on Feb. 15. Curated by Steinhardt Undergraduate Academic Adviser Lonnie Woods III, this exhibition commemorates Black History Month by exploring the significance of creating art as a black artist against America’s current social and political backdrop.

This exhibition comprises works in a variety of mediums, including paintings and drawings; mixed media installations; video and audio pieces; and photography. Woods said that the show illustrates how various works juxtapose each other and how the artists express their identities in works ranging from the autobiographical to the totally abstract.

“I wanted the show to have a lot of contrast, whether that be in color, subject matter or in theme,” Woods said. “While it’s all about black artists, I also wanted to expand the visual narrative of what black art is.”

The concept was loosely based on the Black Arts Movement of the mid-1960s, which encouraged engagement by black artists, writers and performers in the creation of a new aesthetic that formed a new identity for black artists within the art world.

Visitors entering the exhibition are faced with a gigantic black-and-white installation by Steinhardt freshman Kaylee Reynolds. On the surface, the work looks like a subway map, but it is also a self-portrait of the artist that explores her identity as a black female in the United States at different stops. The title of the piece is “Utopia,” the artist’s intended destination.

Another section of the exhibition includes photography and video pieces where the mixed media become more colorful as they display shocking pinks and blues. One such work was made by studio faculty member Erika Ranee. The conclusion of the show features a piece called “Tic Tac Toe” by guest artist Steven Mosley, an African American painter based in New Jersey. It was in nspired by the famous black artist Jean-Michel Basquiat, and Mosley uses alternating neon-colored human heads and skulls to juxtapose life and death on a tic-tac-toe board.

While the variety of work in different styles and mediums may feel chaotic, the 17 NYU artists accurately represent the department’s small black population. Woods said the show was  created to send a message about the department’s dedication to creating an inclusive environment.

“It is a message that I wanted to make, but I wanted it to be made through the work,” Woods said. “There is a lot of work needed to show there is a space, making sure that people feel comfortable and represented in the department.”

“jux·ta·po·si·tion” will remain on view through March 3 in the Rosenberg Gallery at 34 Stuyvesant St. Admission is free to all.

A version of this article appeared in the Tuesday, Feb. 21 print edition.