The Power of Pettibon’s Pen 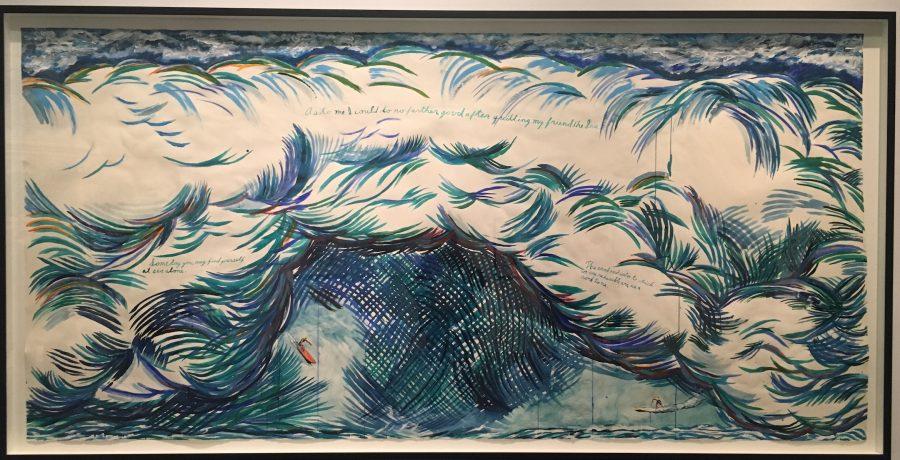 Raymond Pettibon’s new exhibit at the New Museum speaks about dark social and political events in history as well as the impact they have had on individuals. This particular piece depicts surfers under engulfing waves and quotes scattered throughout the image.

Trains, drugs, superheroes and surfers — Raymond Pettibon claims them all, harnessing the vitality and multifaceted reputation of the late 20th century in three floors’ worth of impressive work in the New Museum’s exhibition, “A Pen of All Work.”

Throughout his expansive career, Pettibon’s illustrations have touched upon major social movements, political scandals and individual lives both physically and emotionally. By using his pen as a sword and pulling inspiration from his artistic and literary heroes, there is a palpable energy in his art. He didn’t use his skills to acquire wealth or fame; instead, he applied them to pieces of history on a human scale for all to see.

Navigating the loosely connected series within the exhibit challenges one’s capacity to face sometimes grotesque realities. Pettibon touches pen to paper with authority and a fresh perspective, unifying color and prose to alter traditional ways of thinking about the world of high art and changing the minds of hippies and refined art collectors alike.

Pettibon’s illustrations read like comics: the main image is bold, and large; sometimes indecipherable handwritten scrawls complete its message. Varying in opacity, font and readability, Pettibon distinguishes what he wants easily understood from what requires closer analysis. His attitude towards key events and national themes are sometimes displayed on the surface or  hidden in varying tones of grey and black across the page. The humor is dark, the approach direct and the subjects jarring. Power and resistance are at the core of Pettibon’s work, imploring viewers to channel their emotional reactions into active social change.

The 1960s series of this exhibition is a particularly complex yet comprehensive analysis of this turbulent era. Pettibon’s diverse range of illustrations depict drug use in a positive light — opening the mind to nuances in Donovan — and also illuminate the ugliness of clashes between traditional American values and the inconvenient realities of free love. Pettibon focuses not only on the ‘60s-era values of freedom of expression, artistic vision and social justice, but also the decade’s darker scandals and public outcries, which range from the Charles Manson killings to environmental disasters. His work forces viewers to be critical of their rose-colored nostalgia for the ‘60s. This series is both a celebration of creativity and a critique of those who used it as a mask.

Pettibon’s voice and style are iconic and evocative of resistance and activism — a clear rallying cry for the turbulence that is sure to come in our contemporary political context. Pettibon’s work shows us that political and social upheaval is no new concept and that we will persevere through the power of our own voices just as those before us did.

“A Pen of All Work” will run through April 9 at the New Museum at 235 Bowery. Admission is free with an NYU ID.