Food Mashups: Looking Beyond the Trend 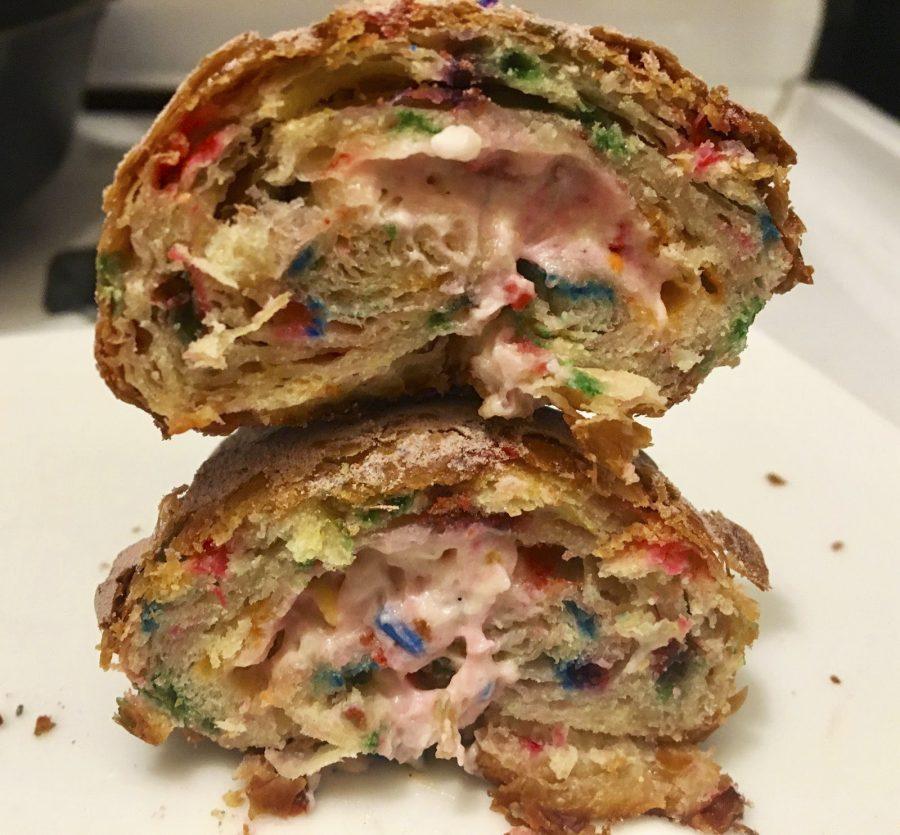 Food mashups like the ramen burger and sushi nachos are great, but are they really worth it? Reviewers of the birthday cake croissant from Union Fare Gastrohall seem to think so.

The New York food scene is a playground where taking food “to the next level” involves mashing things up. People travel to try food mashups like Dominique Ansel’s croissant-donut pastry creation, better known as the cronut. Though some of these mashups attract crowds and notoriety, NYU students find a few of them excessive and unnecessary.

One target is the pizza-topped pizza from Vinnie’s Pizzeria in Brooklyn. As if a large slice of cheese, grease, and carbs wasn’t enough, this mashup is exactly what it sounds like; mini slices of pizza on top of a larger slice of pizza.

“I don’t see much of a point to it,” CAS sophomore Yumi Obuchi said.  “To be honest, it is an epitome of American excess.”

Though many live by the motto, “Always say yes to pizza,” there is something excessive about this trend which fails to provide nutritional value or added flavor.

CAS sophomore Benjamin Kaneda agrees with Obuchi that many of these food combinations may be creative, but are not as tasty as they look.

“I’ve tried the ramen burger at Smorgasburg,” Kaneda said. “I love ramen, and I love burgers so I definitely wanted to try it. It was fine — not great but just okay.”

Smorgasburg also serves sushi nachos. Warm fried tortilla chips are topped with cold ahi tuna and shrimp and then drizzled in a creamy sour cream and cilantro sauce and chopped green onions. The dish is a contrast of tastes, to say the least, as its components have different cuisines mixed into every bite. Though fusion foods are tasty, some textures should just not mix — cold sushi, creamy sauce and crunchy hot chips for one.

The birthday cake croissant is a crowd favorite at Union Fare, a few blocks north of NYU’s campus. When pulled apart, the buttery and flaky croissant dusted with pink sugar reveals a rainbow-sprinkled center filled with funfetti pastry cream. This festive dessert satisfies the sweet tooth without being overwhelming.

Not all food mashups succeed at being both flavorful and aesthetically pleasing. Instead, some seemingly exist to attract attention to a business.

“A lot of these food mashups seem more like a gimmick,” said Obuchi. “It’s no secret that these spots are packed with tourists or food bloggers eager to document the food rather than actually enjoying the dish.”

A version of this article appeared in the Monday, February 13  print edition. Email Tiffanie Hwang at [email protected]