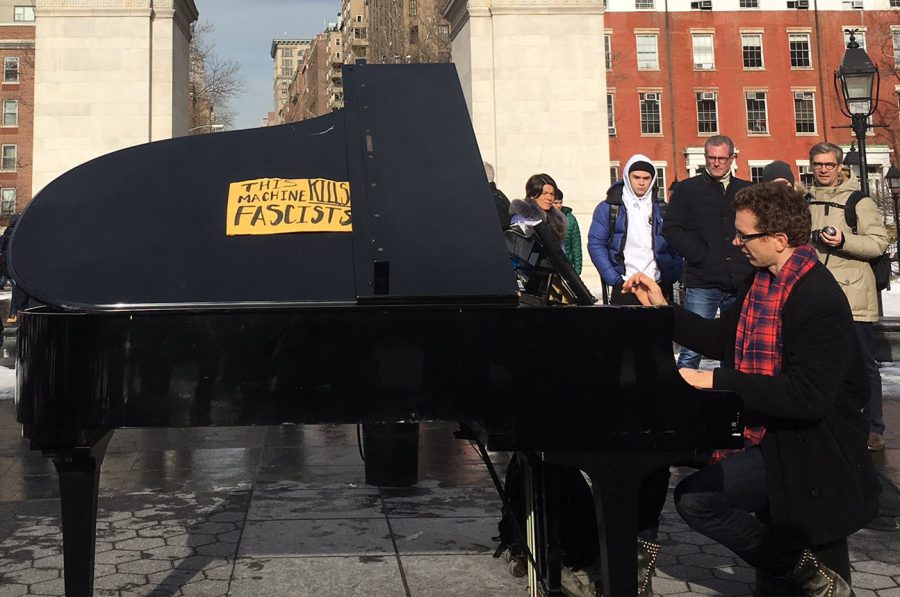 A pianist who frequents Washington Square Park altered his instrument with a sign that reads "this machine kills fascism." He played in front of the arch as people gathered to record his music.

From Staten Island this morning to Los Angeles this past week, the United States Immigration and Customs Enforcement division demonstrates its dedication to President Donald Trump’s immigration stance. A rally in Washington Park today protested the immigrant raids across all states impacted by this new movement.

Called Here to Stay y No Nos Vamos, many Spanish speakers attended and spoke at the rally, many of whom expressed their concern and their desire to not budge on the matter. One speaker who wished to remain anonymous discussed how many people came to this country for jobs and not just for the novelty.

The speaking platform was formatted like an open mic affair — anyone with a message was allowed to address the crowd. After every speaker, the crowd chanted rally cries: “No Ban On Stolen Land,” “Broken Windows Broken Promises” and “No Borders” were common phrases yelled in support. People held up colorful signs that demonstrated anything from simple messages to caricatures of President Trump.

Third-year law student Ahmed Gupta has participated in a few other rallies before this one, and he said that this rally was organized by a coalition of different organizations under the banner of an organization called Immigration Customs Enforcement-Free New York, or ICE-free NY.

“Basically we are out here demanding that NY be free of ICE agents — not just that we provide some kind of nominal safeguards to immigrant communities from deportation but that we do not need ICE in the city.” Gupta said. “I think it’s despicable and horrible, but it’s part of long history in this country of targeting people to whom we don’t extend basic rights.”

He said that these types of rallies are also a great way to see people from diverse communities standing together against something for a greater cause.

CAS junior Katie Jung was one of these people. Originally just passing through Washington Square Park, she stopped to participate, because Jung felt that showing her support was the least she could do to demonstrate that she was in solidarity with those who had been affected by either the raids or the recent executive orders.

“It’s hard to go on about your day knowing that there are people out here protesting for a cause that’s actually impacting people’s lives in an unintended negative way.” Jung said. “My family hasn’t personally been affected, but friends and colleagues that I have here at NYU have been definitely been impacted by the recent executive errors.”

Tisch alum Meg McDermott who graduated this past year decided to come and support the rally by using her white privilege to raise awareness. She called the recent raids and actions by the New York Police Department despicable and said that she wants to bring light to the hatred that is coming about. McDermott sees that even though one small rally in a public place might not create the most change, every movement starts on a local level.

“It is exhausting to witness the multitude of ways that I as a white person benefit from the policing of black and brown bodies and the violence perpetuated against black and brown bodies in a number of communities,” McDermott said. “If the local law enforcement is willing to carry out those actions, we have to remember that those these orders might be coming from Washington, they are implemented by everyday people in our communities, and I think it is very important to mobilize on a local level. I think it’s really important to connect police brutality in our local communities to this ban because they’re all really same. It’s all the same hatred.”