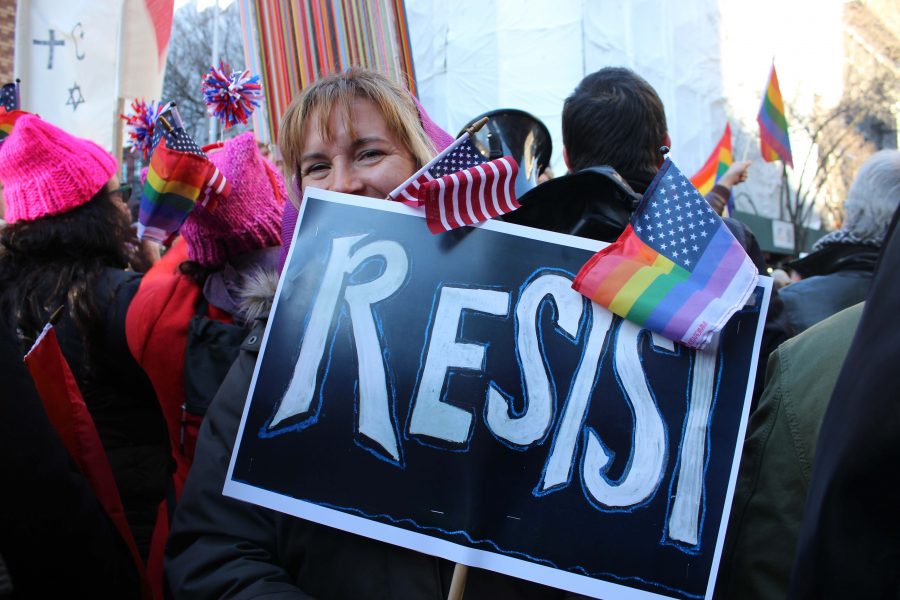 Man holds up poster, relaying the message that Americans must resist the discriminatory policies Trump is trying to instill.

The biting cold could not stop the LGBT community and their supporters from waving kaleidoscopic flags in the sky, punctuating this otherwise grey day with rainbows.

Adorned in colorful banners, the Stonewall Inn was surrounded by protestors from the Pro-LGBT Rally organized by New York City Council member Corey Johnson. The Greenwich Village gay bar was recognized as a National Historic Landmark after it was the site of the violent clash between the police and the LGBT community which sparked the Gay Right Movement in 1969. Once again, this establishment is serving as a rallying point for the LGBT community.

Johnson encouraged protesters to stand in solidarity with other populations made vulnerable by Trump’s controversial policies. He also encouraged the thousands of protesters to speak out against Trump’s anti-LGBT nominees nominees and appointees. His picks include Secretary of Education Betsy DeVos, who has supported a number of conservative Christian groups against LGBTQ marriage, and chief of staff Reince Priebus, who spearheaded a platform that called for the repeal of same-sex marriage and other discriminatory actions.

“We stand in solidarity with every immigrant, asylum seeker, refugee and every person impacted by Donald Trump’s illegal, immoral, unconstitutional and un-American executive orders,” Johnson said to the crowd.  “We will also speak out against Trump’s selection of the most anti-LGBT nominees and appointees in modern history.”

During the rally, Johnson recalled the actions taken at Stonewall decades earlier to empower protesters. He said that people should review the lesson taught to them by Stonewell that progress does not come easily.

“They fought for this,” Johnson said. “They took to the streets and now it’s our time. It is our job to make sure that progress continues and that we push back against this demagogic, pathological liar in the White House.”

Executive Director and Imam for the Islamic Center Khalid Latif, discussed the recent hate crimes on NYU’s campus and around the city, specifically the swastikas found on NYC playgrounds and NYU dorms.

Omar Sharif Jr., an Egyptian-Canadian actor and gay activist who currently lives in the United States, told the story of how he was forced to leave his home in Egypt after he came out and received death threats.

“That’s who refugees really are,” Sharif said. “We aren’t facts, figures and statistics— we’re not a moral or ethical debate. When we leave our countries, when we flee for security, it’s not with malice in our hearts it’s looking up, not to the stars, but to the stars and stripes.”

Sharif also said that the United States has been a beacon of liberty, hope, justice and freedom to many people over the years.

“Don’t back down, resist!” Sharif said.

A version of this article appeared in the Monday, Feb 6. print edition. Email Miranda Levingston at [email protected]