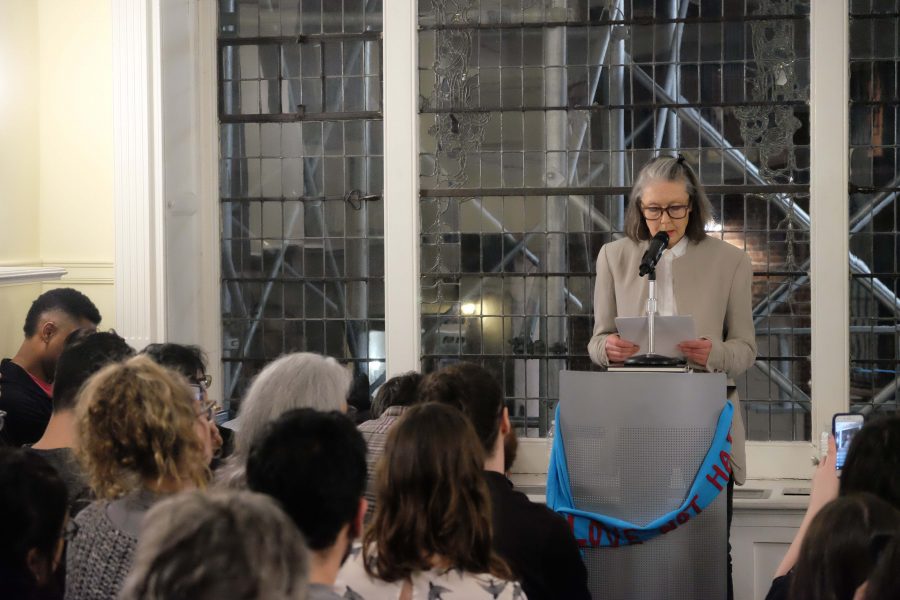 “People who don’t read poetry read Anne Carson,” said Deborah Landau, Director of the NYU Creative Writing Program, with twinkling irony in her introduction for Anne Carson at the Lillian Vernon Creative Writers House on Thursday. It was easy to confirm the truth of her statement — the doors to the event closed at 6:25 p.m., but the crowd outside remained for the duration of the reading. Few other poets could draw a comparable crowd on a weeknight.

Carson’s writing spans almost every imaginable genre, including translation, fiction, criticism and drama, but is always unmistakably hers. In her introduction, Landau spoke about some of the most recent developments in Carson’s writing, including her experiments in randomization and digital media with her husband, Robert Currie, as well as her performance art pieces that have taken over the Lillian Vernon House in recent years. Although her academic focus is classics, the innovative Carson embraces new technology. Still, many audience members were curious about her NYU undergraduate class in ancient Greek. Her interest in ancient Greek poetry is constant in her work, and among her books are translations and adaptations of Sappho, Euripides, Aeschylus and Sophocles.

On Thursday, however, Carson read three newer prose pieces. She began the reading by confessing that the distinction between prose and poetry seems arbitrary. Her work proved her point, sliding gracefully between lyrical prose and verse, hovering between memoir and fiction. The first two shorter pieces were included in her collection of chapbooks, “Float,” released last year. The third, however, was a long meditation on an unnamed narrator’s quest to write a novel, and was written “about a week ago.” The story undoubtedly resonated with the crowd of hopeful writers in the home of NYU’s MFA program. Carson’s ability to inhabit the mind of a fresh and failing writer despite her international renown evidences her ability to connect with readers – a key reason for her fame. In the shocked words of one audience member during the question-and-answer session, “You wrote that a week ago?”

Perhaps surprising to readers of her often painfully frank and sincere work was her sense of humor, both in her work and in conversation with the audience. When asked about why she chose to teach Homer’s “Odyssey” this semester, she responded by dryly saying, “Well, they told me to teach Homer.” Her first prose piece, partially about reading Hegel in the winter, drew frequent laughs when she commented candidly on his complete unreadability.

Thursday’s reading proved to the crowds inside, outside and following on Facebook Live why Anne Carson has received unanimous praise. She reaches past the contemporary moment to craft her unique and universal voice, one that is both as ancient as Sappho and intimidatingly modern.

A version of this article appeared in the Monday, Feb. 6 print edition. Email Michael Landes at [email protected]