Thoughtful Chaos at the Whitney 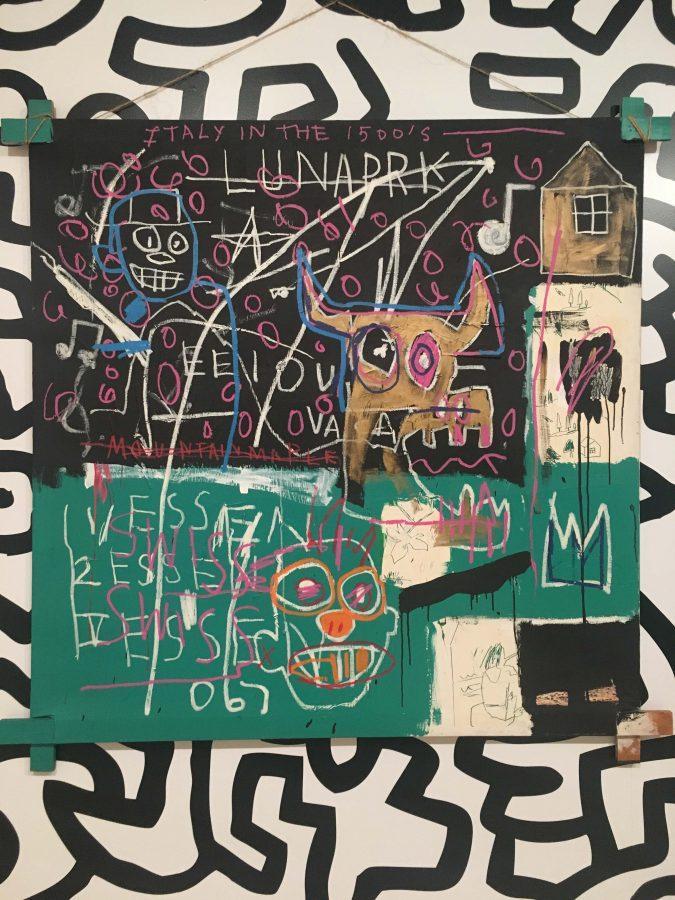 "LNAPRK" by Jean-Michel Basquiat, on display at the Whitney Museum of American Art.

The 80s evoke a variety of images in the minds of Americans, ranging from neon shorts and disco to pastel scenes from “The Breakfast Club” and other John Hughes films. “Fast Forward: Painting from the 1980s” at the Whitney Museum of Modern Art, however, features the experimental painting created as a critique of the modern world.

Although painting is generally considered a more traditional fine art medium, some American artists revisited the artistic mode during the 1980s and created pieces that mirrored the vibrancies and tensions of the era. The gallery scene in cities like New York welcomed nonconformist and often inharmonious works like those of graffiti artist Jean-Michel Basquiat onto their walls, blurring the lines between high art — say, Michelangelo — and low art — something like Andy Warhol. The physicality of painted expression flourished, and it allowed painters to pursue heavier subjects and deepen viewers’ interactions with their art in unprecedented fashions.

One of the highlights of the exhibit is Moira Dyer’s series of paintings based on her magnified fingerprint. The artist’s hand can be seen in the brushstroke and felt in the tonality of the selected color palette. Dyer’s work heightens this tactile sense by abstracting her own fingerprint in order to create “authentic emotion,” as she describes it. The work, in effect, bridges the gap between mere visual consumption and physical interaction within the media-saturated atmosphere of 1980s America. Dyer, an artist who was viscerally concerned with issues of identity, was able to focus the relative economic prosperity and societal interest in personal expression into her paintings.

Other artists turned their palettes to political issues, using their art to spark conversations surrounding topics like war, feminism and the AIDS epidemic. Ross Bleckner, an artist native to New York City, illuminated the AIDS crisis in his work “Count No Count,” a massive waxed black canvas pierced with small beams of light. The AIDS epidemic caused Bleckner to recognize the weight of his own mortality, as well as that of those around him. By mixing ideas of hope and despair with a traditionally positive symbol — light — Bleckner’s brushstrokes allow viewers to reflect in a fresh and unyielding manner.

The exhibition itself displays the same melange of thoughtful chaos as is visible within the paintings themselves. The viewer must sift through layers of bright colors and bold themes that assault the eyes in order to discover the heart of a piece’s meaning. Although there is little continuity or pattern in the gallery, there is a satisfaction in making connections between images to discover the truth about the period. One could equate the exhibit to wandering through the human mind, searching for answers to worldly happenings as well as internal agonies. At “Fast Forward,” these truths are present and unabashedly expressed. The exhibit is a window through which we can examine a recent past, helping us gain confidence in order to address the inevitable hurl of our world into the future.

“Fast Forward: Painting from the 1980s” opened Jan. 27 and will remain on view through May 14. Admission to the Whitney Museum of American Art is free with your NYU ID.