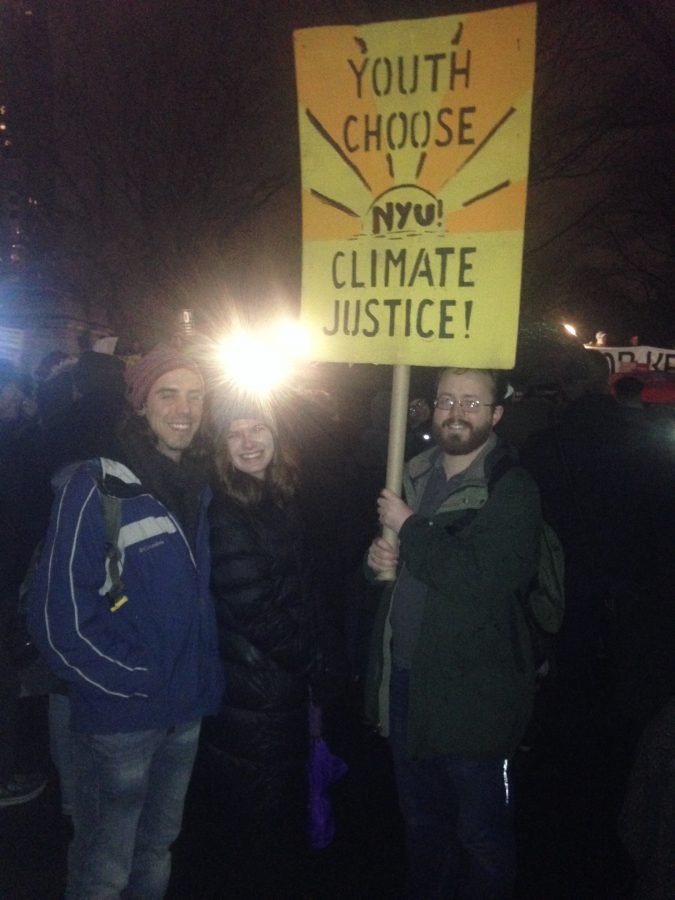 Donald Trump signed a document today that allows the government to reconsider construction of the Dakota Access pipeline, a project that was rerouted in December to avoid destruction of Native American land. The executive orders signed by Trump permit the fast tracking of both the Keystone XL pipeline and the DAPL.

Before the U.S. Army Corps of Engineers announced that the pipeline would no longer cross over Standing Rock Reservation, the possibility of its existence was widely protested. People have already began organizing similar protests such as “NoDAPL NoKXL NYC Rapid Response,” which was hosted by Defund DAPL, The People for Bernie Sanders, Grassroots Action New York and other social activist groups. The protest started at Columbus Circle and ended with chants of “Street by street, block by block, we stand with Standing Rock” and “People have the power, Trump has a tower” outside the president’s Fifth Avenue Trump Tower.

John Linstrom, a student at the Graduate School of Arts and Sciences, attended the protest today at Columbus Circle. He said that it is important to be physically and visibly present at protests such as today’s in order to effectively oppose Trump’s oppressive policies.

“One of the really powerful things at the Women’s March in D.C. on Saturday, which I was also at, was the sense of solidarity,” Linstrom said. “The people who are frightened by Trump’s policies are not alone — we have each other for support and also to just be a visible reminder to the rest of the country that we are not going to stand for this kind of thing.”

Linstrom thinks that protests and rallies bring people together and make connections which help maintain the present momentum to resist Trump’s policies, especially the ones that restrict the rights of other Americans. He said that people need to be there and support each other in peaceful but forceful ways.

“Trump continues a legacy of past United States leaders, much like Andrew Jackson’s removal policy of ‘The Trail of Tears,’ actively dispossessing and removing Indigenous Peoples from their connection to land and natural resources in order to exploit it for a powerful and privileged few,” Baca said. “Trump is literally approving legal, moral and ethical injustice by signing these executive orders on DAPL and Keystone pipelines. This is proof his administration is racist and doesn’t respect its own laws.”

Baca said that he still has hope that by protesting and opposing this decision the people will be able to overturn the construction of these pipelines.

“I refuse to believe that the people, not the government of the United States, will allow that [the construction] to stand,” Baca said. “Indigenous communities and their leaders are on the frontlines protecting our water and environment for everyone and they need everyone’s help right now more than ever.”

CAS seniors Lola Jusidman and Olivia Rich, two active members of NYU Divest, said they knew this decision was coming by the nature of Trump’s campaign.

“The shock and horror we felt in reaction to the November election came in large part from our understanding of a Trump administration’s implications for the pipeline battles and the climate battles,” Jusidman and Rich said in a joint response. “Our campaign has always lent strong support to pipeline fights — our members got arrested outside of the White House in 2014 to protest the Keystone pipeline, and [former president Barack] Obama listened.”

The two said that although they are unsure as to whether this new administration will respond to protests and demonstrations the way Obama did, the group will continue with their efforts.

“We do not know how this administration will respond to popular protest wherever it interferes with the fossil fuel industry’s interests,” Jusidman and Rich said. “Trump and the fossil fuel lobbyists and executives in his government are pursuing a radical anti-environmental, anti-indigenous, anti-science program that will cause lasting damage, even while most of Trump’s base supports renewable energy.”

The two went to Trump Tower to protest because they said the Dakota Access victory was hard fought and that they know the Water Protectors — the collective name for those protesting in Standing Rock, ND — will continue stepping up their fight.

Tisch alumnus Jacob White is also a member of NYU Divest and participated in the protest today. He thinks that attending these protests is the most effective way to show opposition to Trump’s threatening agenda.

White said that while there are many changes happening in the country, it is important to maintain a sense of community throughout the protests. He said that the community holds these complex issues together and that everybody needs to work together to solve these problems.

Taylor Norman, co-president of NAISG, also said that Trump’s actions did not come as a surprise.

“As a current shareholder in companies associated with DAPL, we knew the Trump presidency would challenge all the work that has been done to stop the pipeline and others like it,” Norman said. “It is my hope that the protests in NYC will motivate people to again focus on the importance of our natural resources and the humanity of those affected by environmental racism.”