‘Poison:’ A Look at Grief and Love 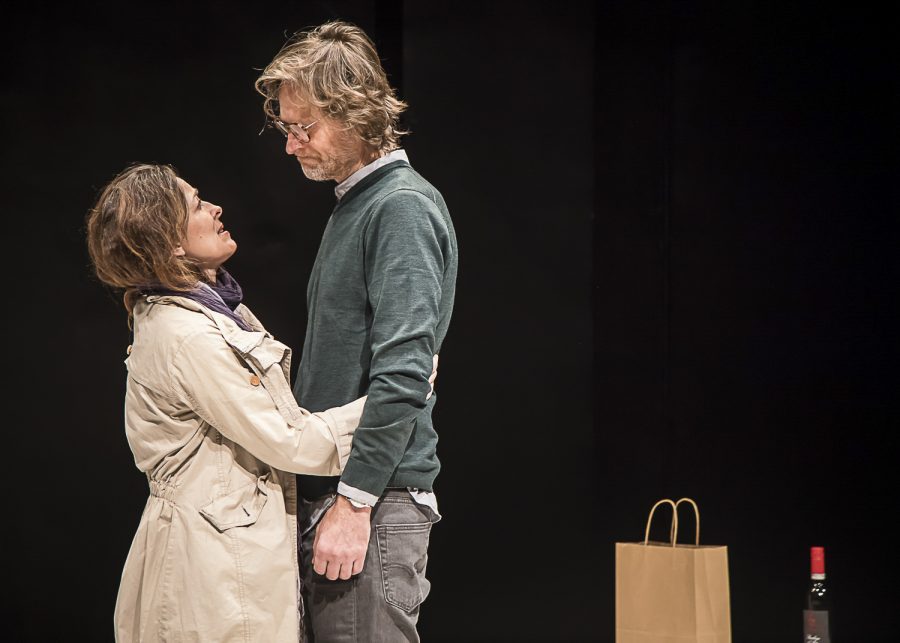 Poison is now playing at the Beckett Theater and showcases the talent of award winning playwright Lot Vekenmans.

“I hate happiness,” She says, about halfway through the play. “Happy people … they’re just so … ugh.”

“Poison” just opened at the Beckett Theater on Theatre Row, and She is one of two characters that the audience studies in close quarters for 90 minutes. This line is one of the funniest in the play.

It is easy to see why the play garnered the distinguished Taalunie Toneelschrijfprijs award in the playwright Lot Vikemans’ native Netherlands in 2010. The play crackles and bites at the audience, producing no shortage of pain, depth and philosophy from its stark staging and sparse script.

The situation at the outset of the play takes from Ibsen’s ability to weave situational metaphor. The two are a couple who were separated for 10 years, then reunited because their son’s grave must be moved due to natural gas seeping into the groundwater by the graveyard.

The gas is ostensibly the poison of the title, but the poisonous nature of grief is a constant in the play as well. It slowly becomes clear, through halting, hesitant and painfully realistic dialogue that, for better or for worse, He has moved on, while She has not. Vikemans depicts human nature with a deft realism; like in life, the pair moves towards reconciliation, then darts back, always tortured by ambiguity.

Blame and memory are alternately weapons and life rafts for both to survive, but the banality of living after tragedy permeates every moment of high drama in the play. Imprisoned by their bodies, actress Birgit Huppuch and Michael Laurence awkwardly sit, wander, lie down and occasionally even touch in the stark, minimal space. Jian Jung, the set designer boasting an MFA from NYU’s Tisch School of the Arts, carves the space out of raw white elements with the odd centerpiece of a necessary vending machine. The dry irony of this vibrant machine in such a desolate place mirrors the script, in which pain is spaced out by silence, some chocolate or a phone call.

He and She are not the only two to grace the stage, as Jordan Rutter, a countertenor, performs hauntingly a cappella Strauss Lieder at intervals, a touch that betrays the deeply European sense of the production. Rutter is only a presence at times, tangentially linked to the conclusion of the play, but fundamentally an aesthetic choice whose presence, while perhaps not crucial to the function of the play, lifts the experience from painful voyeurism to a universal experience of loss.

Hearing him sing and watching Him and Her sit or stand awkwardly on or off stage (with no wings, exits are marked by actors facing towards a wall on the side), one cannot help but know that what is depicted in the play is not simply about a situation that two people experience; it is about the lives that each of us lead, and the fragility of being human.

A version of this article appeared in the Monday, Nov. 28 print edition. Email Michael Landes at [email protected]