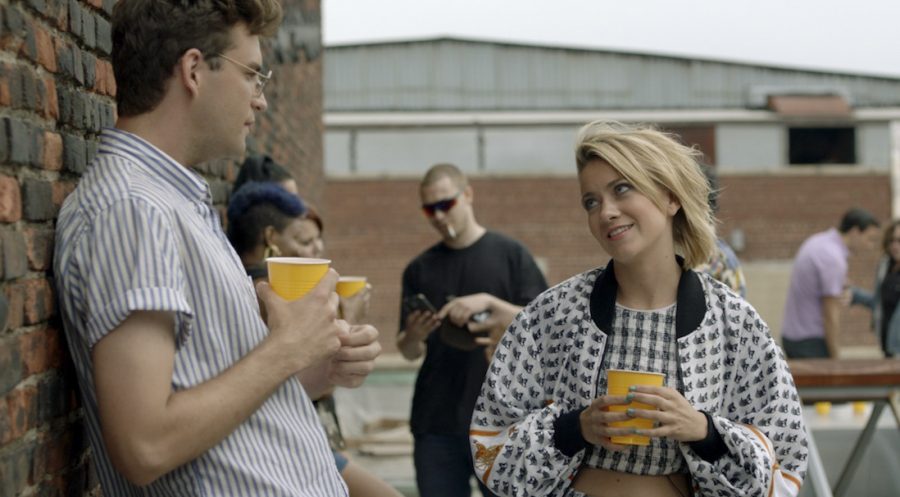 The tumultuous city of New York proved to be the ideal inspiration for young directors Charles Rogers and Sarah-Violet Bliss. The pair of NYU film graduates co-created “Search Party,” their new television series premiering on TBS on Nov. 21. They conducted an intimate cafe interview with WSN before an advanced screening of their pilot episode.

Rogers and Bliss described New York City as a “cultural cesspool” of strong characters and stories. Drawing people from all corners of the world, this city brought the two young film students together in a thesis film course at NYU, and they have worked together ever since. By coupling their shared passion for satire and an accurate “eye for bullshit,” Rogers and Bliss brought their talents, personal connections and love for Woody Allen to “Search Party.”

Knowing the nature of the competitive landscape of film and television, the creators of “Search Party” took a proactive, non-traditional approach to the pitch room. Rogers and Bliss worked independently with Jax Media to create and shoot a finished pilot with handpicked actors, including Alia Shawkat of “Broad City” as Dory, before even speaking to a network for feedback or funding. Their additional autonomy allowed the two directors to illustrate their complete vision for the project, accurately showcasing their style and the direction of the series — an unconventionality that TBS embraced.

The creators describe their series as “true,” due to the organic nature of the entire creative process. Dory and her fellow characters each reveal personal weaknesses and illuminate uncomfortable issues, all in the particular style of each actor and their character. Brandon Hall, a guest at the screening, who plays the character Julian, told the audience that while on set, Rogers would tell him to “just let it go” and to not worry about the form, technique or artificiality of a script. “Search Party” embraces the actors’ individuality, a detail that is evident in the truth of the stories and the genuine emotion present in each scene.

The show goes far beyond millennial satire and commentary, as it is actually categorized as a dark comedy. Bliss elaborated on this label, explaining that the dark side comes from two places. The first is the “rabbit hole” murder-mystery that the clan embarks on, full of blood and foreboding danger, and its darkness is also found in the emotionality that makes the viewer aware of their own limits and biases: a confrontation that can be troublesome yet clarifying.

Rogers and Bliss see their success stemming from the trust they share amongst themselves, their coworkers and their actors. The layers of personalities, patience with the creative process and teamwork on set is what created the show’s harmonious blend of satire and mystery. A unique and modern outlook on television series, “Search Party,” with its admirable wit, depth and darkness, is already on its way to success.