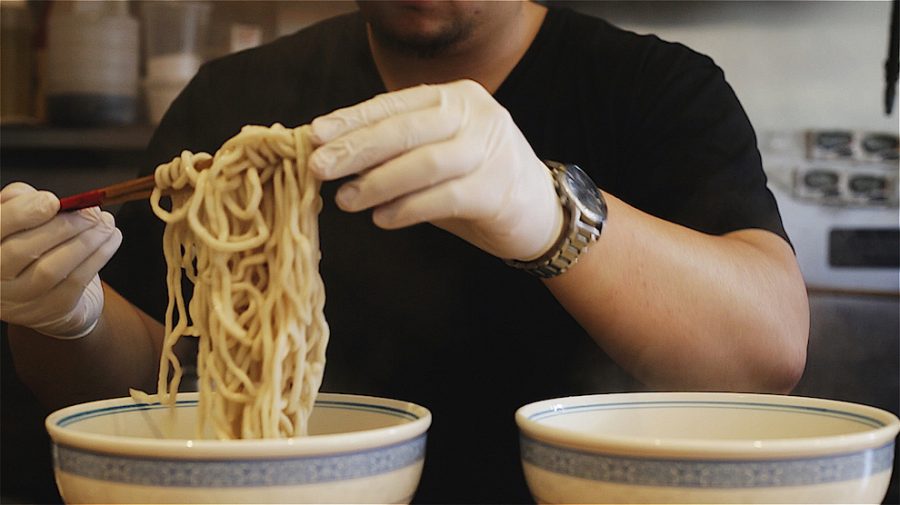 An unassuming storefront on First Avenue gives way to the lively and fragrant atmosphere of new East Village restaurant The Tang, a contemporary noodle bar that draws on the traditional roots of its owners, two of whom are current CAS senior Yu Li and SPS alum Eric Sze. The Tang, which opened its doors on July 21, has seen a well-deserved positive reaction from the community, boasting four stars on Yelp and almost 2,000 followers on Instagram.

Sze, the chef, explained that the restaurant is still in its early stages.

“We have our slow days, we have hectic days,” Sze said. “We’re really pretty much still trying to figure things out. But today versus three months ago, things are definitely easier.”

The Tang, despite its newness, knows what it wants to achieve: a balance between modernity and tradition. “Authentic flavor with a modern New York twist” is its manifesto. Li, who manages the restaurant’s operations, came up with the original concept for the noodle bar.

“I had a favorite noodle shop back in Beijing close to my home,” Li said. “They had just introduced the steamed noodles. I wanted to create something similar. Initially I wanted to open more traditional flavors, like the Beijing style. Then I reached out to [Sze] and we decided to create a more contemporary noodle shop, so came The Tang.”

This contemporary and traditional mix is well-established through The Tang’s menu. The pork belly string bean steamed noodles are a bestseller at The Tang, and Sze explained how he gets the powerful punch of flavor the noodles bring to the dish. A soy stock is created from string beans and ground pork and placed into a wok with raw noodles. The noodles are steamed until the stock is reduced into a sauce and then tossed in that sauce. Two pieces of rich pork belly top the dish off. The noodles are fragrant and aromatic, packing in twice the flavor because of the steaming method, and the sauce is rich in flavor — it’s a bestseller for a reason.

But as much as Sze loves the pork belly string bean steamed noodles, he recommends the sizzling noodles.

“It’s kind of a blend of Chongqing and Sichuan,” Sze said. “The spices are more Sichuan. I use some garlic powder and cayenne pepper, kind of an homage to the American south. The chili powder itself looks like dry rub. But the technique I picked up from Xi’an, pouring sizzling hot oil over the noodles, over the spices, hence sizzling noodles.”

Running a restaurant with growing popularity is no easy feat, however, and finding the balance between work and school can be tough. Li, who is in his last year at NYU studying computer science and economics, describes his days as busy but manageable.

“I go to school two full days, I get off at five,” Li said. “I come back at night, check the food, make sure everything is okay. I go home at 10 or 11, I squeeze a little bit of time to do my homework. It’s okay, I only have five more classes, so I’m getting there.”

A version of this article appeared in the Monday, Oct. 24 print edition. Email Kaitlyn Wang at [email protected]