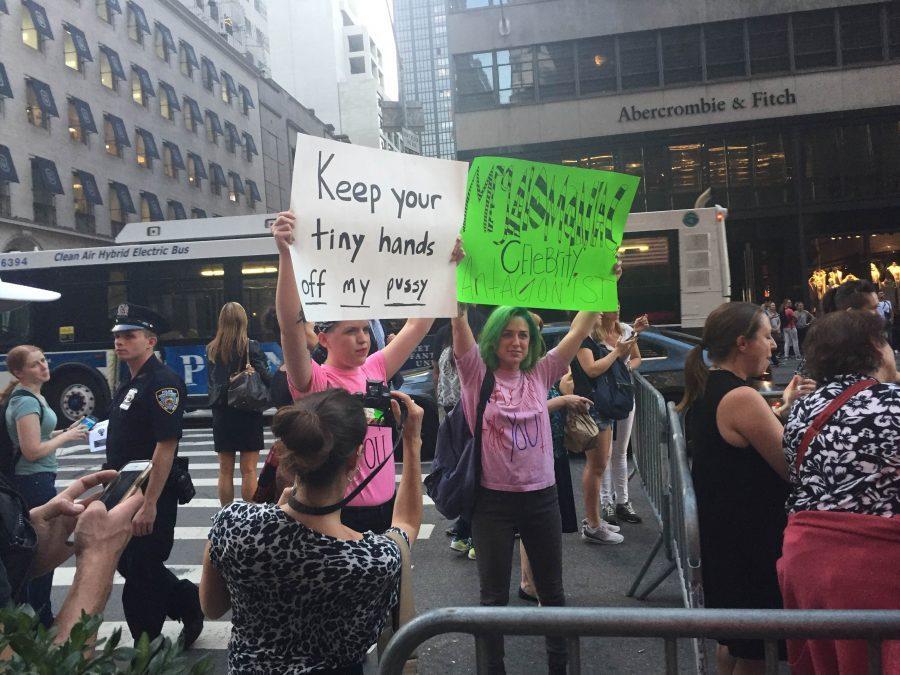 On the afternoon preceding the third and final presidential debate, a crowd gathered at Trump Tower to protest his treatment of women.

Hours before the final presidential debate, Pussy Power at Trump Tower — a protest in response to sexual assault remarks Donald Trump made in a recently leaked video to the Washington Post  — formed outside Donald Trump’s skyscraper on Fifth Avenue.

Protesters yelled Trump-inspired chants, such as as “grab them by the pussy,” “grab him by the ball-its” and “dump Trump.”

Police herded protesters into two corralled areas outside the Trump Tower, but due to the large turnout of over 200 people, the crowd spilled onto the sidewalk within 10 minutes. As more protesters and observers arrived, the NYPD directed people to either move into the fenced off area or walk off the street and the sidewalk.

Brooklyn resident Avri Beard organized the event with her three friends Jennifer Tench, Anne Clark and Melissa Irwin. Beard said that although she does not believe the protest will have any impact on Trump’s actions or campaign, the organizers of the event wanted to reappropriate the term pussy and make it positive with #pussypower.

“We are four pissed-off women who want to express our outrage that a major political party would stand by a presidential nominee who brags about sexually assaulting women,” Beard said about the event’s creation.

She said that the four of them then created a Facebook group for Pussy Power at Trump Tower, figuring that there were probably other New Yorkers who felt similarly about sexual assault and women in society.

Nursing freshman Ceci Chen indicated that she was attending the event on Facebook because she said that despite Hillary Clinton’s recent lead in polls, Chen thinks that it is important for people to still get involved in protesting Trump.

“The only way to really facilitate and promote change in the modern day is to make a protest rally and show some form of movement for or against something,” Chen said. “In this case, it’s a movement telling people to not vote for the angry man with the orange tan, please.”

While she does not think the demonstration influenced Trump in any way, she thought that this protest was just a good way for people to express themselves. Chen believes that it is especially vital for people to protest, since Trump has not taken responsibility for his actions in the past.

“Because of his ‘status’ Trump can afford to say these kinds of things and not have to care too much about it,” Chen said. “If Britain can actually pass Brexit, who knows what else 2016 is capable of.”

Tisch senior Kyle Andrews attended the protest to demonstrate solidarity specifically against sexism and not to support Clinton, but he said that he could not foresee the event impacting the election. He hoped that this protest could make Trump reflect more on his image.

“I see this event as sort of beyond just the election itself, and as more of a general show of force against sexist very powerful people such as Trump, and overall a general desire to keep him and his views out of the White House,” Andrews said. “It [the video] has already tanked his polling numbers, so with some luck, this anger will stick around beyond just the election.”