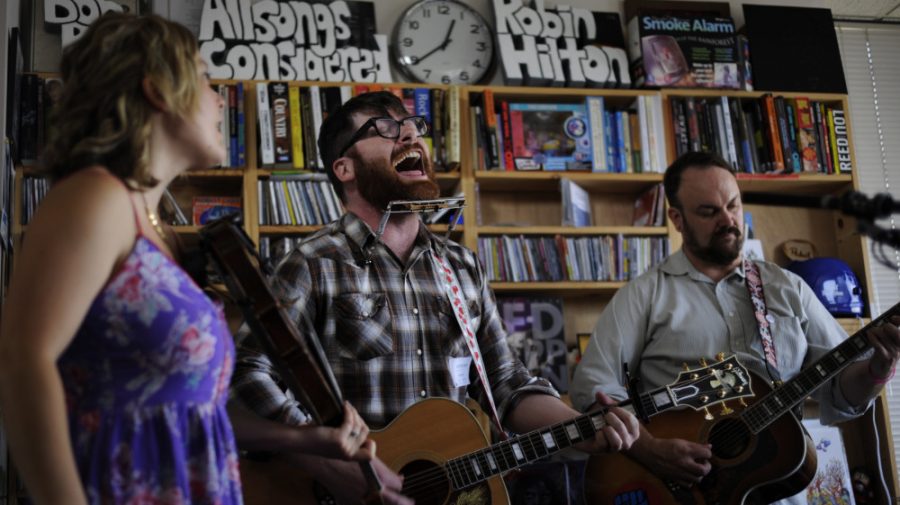 The Decemberists perform a Tiny Desk Concert at the NPR Music offices.

Tiny Desk best serves the indie genre and no other band displays this better than the Decemberists. Not only did their setlist consist entirely of songs from my favorite album of theirs, “The King Is Dead,” but they managed to keep the vibrancy of the songs alive within a live, acoustic setting. The frontman, Colin Meloy, has a commanding presence and a multitude of harmonicas — both of which he utilizes in this short performance. The performance encompasses the best of Tiny Desk, as it has the intimate atmosphere that landmarks the best of the series. — Abbey Wilson, Assistant Managing Editor

By design, Tiny Desk shows are supposed to be small and not as highly produced as, say, the BBC1 live performances or a full and proper concert. Still, there’s small, and then there’s Mitski’s 2015 performance. The setup was just her with a guitar and a lone microphone. All the songs were short, simple pieces that only lasted a minute or two, and the lyrics tended to lack rhyme and meter, but the more attention I gave the songs, the more I found them to be stunningly astute and achingly powerful. During “Class of 2013,” she sings a verse directly into the body of her guitar. For the show itself, her hair hangs loose over her shoulders and her makeup is noticeably not present. It all makes for a set that could be taken as some brash young punk trying to defiantly make a statement, but it feels to me more like she’s just undeniably asserting herself as simply who she is, without apologizing for a single iota of it. This show was Mitski, in the barest sense, and it was the most resonating performance I ever saw on Tiny Desk. — Hailey Nuthals, Arts Editor

I’m going to have to go with Fantastic Negrito’s Tiny Desk Concert for this. It’s hard to narrow it down to one, but the power and energy that come through in the performance put this one ahead. It seems like the music of Negrito — or Xavier Dphrepaulezz — is written for an acoustic atmosphere like this; it kind of was, seeing how Dphrepaulezz got his start playing on the street in Oakland. The gospel-bluesy sound just has a raw edge to it that makes it stand out in a different way (plus we talked at South by Southwest, and knowing his backstory makes watching him all the more fascinating). Fantastic Negrito — who made it onto the Tiny Desk series just by winning a contest — certainly doesn’t disappoint here. — Alex Bazeley, Editor-in-Chief

I don’t even know where to start with this Tiny Desk — there’s almost as much to look at as to listen to. Even if the music isn’t your taste, it’s worth taking the time to soak it all in. The banter in between songs is among the most fun I’ve seen in a Tiny Desk and the self-confidence that Ben Hopkins and Liv Bruce exude is inspiring in its own right. While watching, if you do get a chance to focus in on the music, you’ll realize it’s lyrically potent and could maybe even stand alone from the personality. — Hannah Shulman, Editor-at-Large

Editor’s note: it should be observed that Hannah Shulman, Editor-at-Large, actually picked literally every single Tiny Desk concert in the history of the series, but because writing that many staff recs would ruin her academic career for the semester, she has selected one to feature.