NYC is the Safest It’s Ever Been, But NYU Isn’t Satisfied 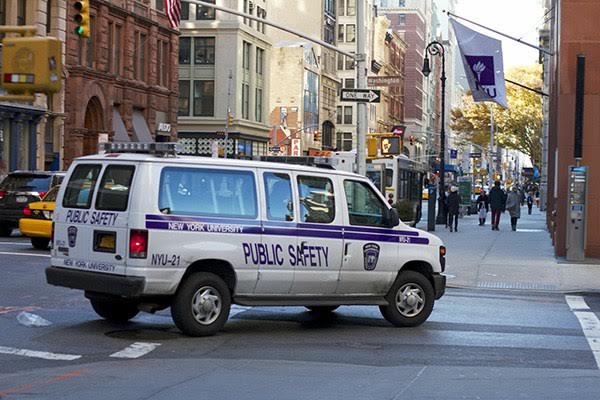 Guard your valuables. Keep your music volume low. Don’t walk alone at night. These are the tips invariably offered to students who decide to go to college in a big city — advice often given without regard for specific crime rates, leaving students unclear about just how vigilant they should be.

It’s safe to say that New York and its college students are the safest they’ve ever been. According to the Economist Safe Cities Index, New York was the safest city in the United States in 2015 based on rankings determined by health security, digital security, infrastructure safety and personal safety.

This doesn’t necessarily mean that New Yorkers feel safe. The Economist places New York as the 10th safest city worldwide, but it ranks 31st in perceptions of safety.

NYU’s attempts to enhance students’ perceptions of safety are multiple: “green light” buildings both inside and out of the Washington Square area are staffed with security officers 24 hours a day, local business “Safe Havens” displaying purple NYU stickers in their windows offer help to students in emergencies and emergency call boxes are distributed throughout campus.

The facts about crime, however, are up to personal interpretation: in 2015, NYU students reported six rapes, one robbery, one felony assault, 16 burglaries and 314 incidences of grand larceny, according to statistics provided by the newly appointed Vice President of Global Campus Safety Marlon Lynch in an email.

Numbers corroborate NYU’s claim on its website that “NYU students are statistically safer than the average city resident.” New York Police Department CompStat data shows that NYU students reported fewer crimes in 2015 than residents of the neighboring 6th Precinct, which consists of Greenwich Village and the West Village, and 9th Precinct, which spans from East Houston to East 14th Street and from Broadway to the East River. These neighborhoods themselves are relatively safe, reporting fewer crimes than the average NYC precinct in all categories except one — larceny.

Larceny is by far the most prevalent crime afflicting NYU students, hence the ubiquitous flyers in Bobst warning students never to leave their laptops alone.

Despite the reassuring statistics, NYU Public Safety is by no means getting complacent. Lynch is gearing up to implement changes to public safety in the upcoming semester, though the exact policy changes are not yet entirely clear.

“An assessment of the Department of Public Safety will be conducted to evaluate everything from current policies, protocols and organizational structure to meeting with campus partners and students to inquire about the needs and expectations from public safety,” Lynch said in an email.

Citing his success at gaining accreditation for the University of Chicago as a public safety agency and implementing an emergency management plan there, Lynch has faith that he will maintain campus security at NYU.

“Although I have spent [the] majority of my career in higher education, each institution is different and has its own culture, needs and expectations,” Lynch said. “But what has been consistent has been my priority to provide a safe environment for students, faculty and staff so they can fulfill their academic mission with a sense of personal security.”

A version of this article appeared in the Sunday, August 28 print edition. Email Abigail Weinberg at [email protected]