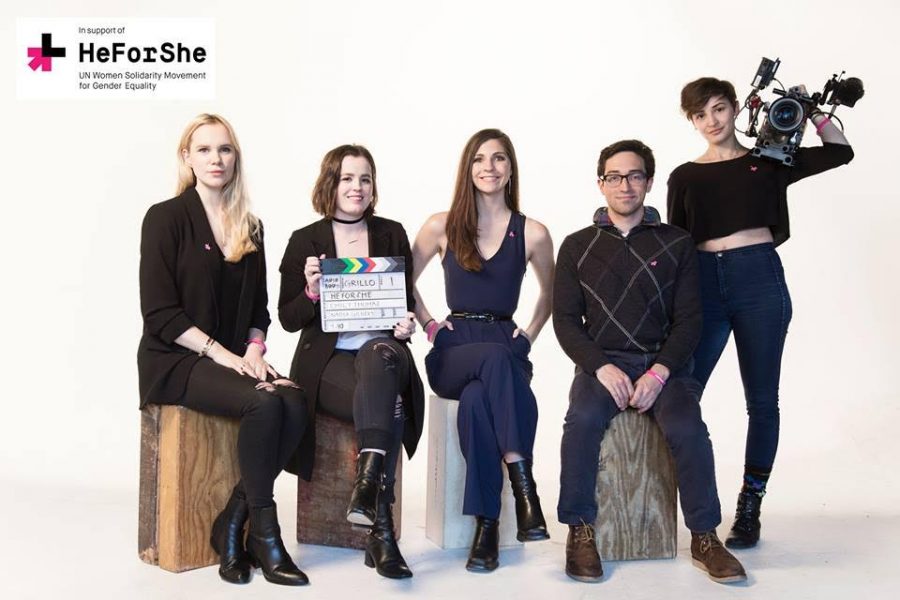 “In Support of HeForShe” is a film created by students in the hopes of facilitating the discussion of gender inequality.

Students involved in NYU’s HeForShe campaign, an initiative that invites men into the discussion on gender inequality, came together to create the “In Support of HeForShe” in an effort to bring attention to this issue. The film, set to be released this summer, focuses on two major aspects: the thoughts of NYU-involved personnel — administrative, student and alumni — on gender equality, and the many inequality issues that are present both on campus and in the world.

The film, which is currently in post-production, began its development last  December, starting pre-production at the beginning of 2016 and filming over a weekend in March.

Executive producer Natalina Schappach, a CAS sophomore, conceptualized the film after her time at a HeForShe Global Youth Engagement Internship with the U.N. this past fall semester. Schappach then started reaching out to other students in an effort to make her idea a reality.

Emily Elizabeth Thomas, a graduate student at Gallatin, was called on by a few of the producers to write and direct the film. A creative activist herself, Thomas felt this film gave her the opportunity to combine her talent for film and passion for the subject of gender equality.

“I wanted the film to authentically document real, unfiltered, collaborative and heartfelt conversations about gender equality,” Thomas said. “Most of all, I wanted to highlight what HeForShe is doing for the progress of gender equality in this country, and all over the world — bringing together all of humanity to fight for the equality of historically disenfranchised individuals.”

Other students on the team include Anna Fredrikke Bjerke and Devin Tusa as additional producers and Nadia Gilbert as the director of photography. Since the film was run entirely by students, the most challenging aspect for the team was finding enough resources. However, Schappach said they were able to move forward because of the generosity of many organizations, such as Clif Bar, Essentia War and Gruppo.

“We were overwhelmed with gratitude as many  organizations and businesses stepped forward to donate time and resources without charge,” Schappach said. “Our incredible post production team at Cutter Productions has made the creation of a high quality film possible and has brought the story we have envisioned to life.”

The film features interviews with many notable NYU students and alumni, including actors AnnaSophia Robb and Suraj Sharma, Kate Bolick, a journalist and a New York Times bestselling author of “Spinster” and Janet Grillo, Emmy Award-winning producer, filmmaker and professor at NYU.

Overall, the team is proud of their hard work and is excited to see how it will act as an agent of change when it is released. Bjerke, a graduate Gallatin student, is part of a creative writing, directing and producing team with Thomas titled LLC Jane Street Productions. She believes one of the film’s biggest successes is its power to bring together influential people who are passionate about the topic.

“The most rewarding part of making this film has been to work with incredible talented, dedicated activists and artists in making a collective effort to raise awareness of HeForShe, and our shared vision that gender equality will benefit all of humanity,” Bjerke said.

Everyone on the team had their own reasons for joining the project, but they were all motivated by a great passion for this cause. Tusa said to him, gender equality is important because of his own upbringing by a single mother.

“I came onto the film because I personally believe in the power of the individual to make a difference, and that social media is a very powerful tool for social impact and change,” Tusa said. “Anything I can do to help out is worth doing.”

A version of this story appeared in the Monday, May 2 print edition. Email Ankita Bhanot at [email protected]