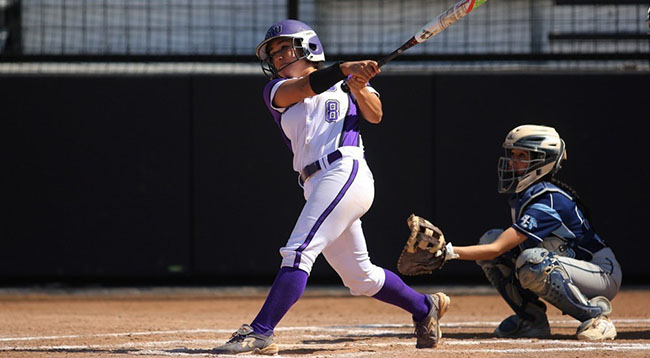 Kahala Bonsignore had two hits across the two games played against Drew University on Wednesday, April 27.

The NYU softball continued to scorch its opponents on Wednesday, taking two games against Drew University with a combined 13 runs.

The bats were a bit cooler in the first game, leaving the door open for a seventh-inning surge by Drew. But the Violets were able to escape with a lucky 4-3 win.

The Violets jumped ahead in the third inning thanks first to a two-run triple by senior shortstop Kahala Bonsignore. Freshman infielder Dakota Damiani tacked on another run via an RBI groundout, plating Bonsignore. Both teams went scoreless for the next three innings, before sophomore second baseman Sage Scheiwiller singled in the sixth, scoring freshman utility player Claire Stefanelli, who led off the frame with a single.

Freshman pitcher Karissa Zubulake held Drew University scoreless up until the seventh inning, where things nearly crumbled. Zubulake secured the first two outs of the final inning, but Drew responded with three consecutive singles, narrowing the lead to 4-1. The Violets’ defense didn’t do her any favors either, as Drew tacked on another run via a throwing error by Bonsignore. With the pressure mounting, Zubulake gave up another RBI single, cutting the lead to one and forcing head coach Now-Allah James to send in freshman Sydni Holtz. Holtz was cool and collected, getting the final out for the win.

There was no need to panic in the second game though, as dynamic pitching and hitting from the Violets and freshman Diana King used a big second inning to coast to a 9-3 win. NYU scored four runs early, the first courtesy of a one-run single from junior captain Val Schwein. Scheiwiller followed with a one-run ground rule double, and Schmus kept the line moving with an RBI double of her own. King, who continues to be an offensive spark, blasted an RBI triple to end the scoring. Drew University tried to catch up by scoring two runs in the third inning, but it wouldn’t be enough.

The Violets added one run in the fourth, thanks again to King, who scored Schwein with a single. The game was blown open in the fifth, with the Violets adding on four more runs to make it 9-2. Bonsignore scored on a wild pitch, and not too long after Scheiwiller came through again with another RBI single. Schmus and King added two more runs, with both hitting singles to cap off the damage.

King allowed only two earned runs while striking out seven, but she could’ve beaten Drew by herself, with three hits and three RBIs on the day.

The 19-15 Violets return to the diamond this Friday against New Jersey City University at Fordham University.