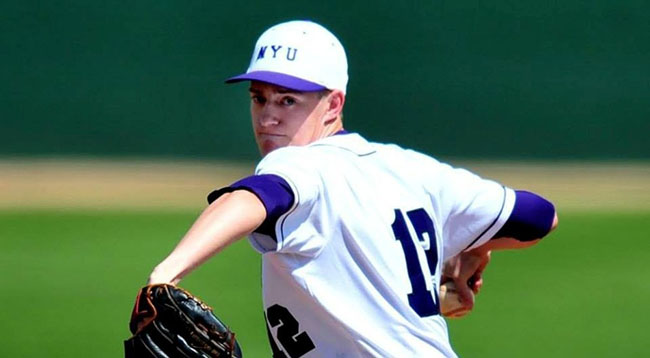 The NYU baseball squad suffered a spirited defeat on Wednesday against the College of Mount St. Vincent in Coney Island. Threatening the Dolphins every time they took a lead, the Violets ultimately lost 7-6, falling to 14-21 on the season.

Senior pitcher Jacob Bader started for NYU, but had a rough time. He gave up two singles and hit a batter before getting the first out of the game. He then gave up a two-run single to St. Vincent’s Brandon Pasquale. Later on in the inning, he gave up a two run double to John McEwan, en route to a four-run inning, the only one Bader pitched.

The Violets rebounded well after this tough start, as a nice inning of small ball had the Violets deficit down to two. Freshman outfielder Jack Walter and junior outfielder Adrian Spitz both reached base to lead things off. They both advanced on a wild pitch before Walter scored on a balk. Spitz then scored on a groundout from sophomore shortstop Jake Smith.

Sophomore pitcher Matthew Wells replaced Bader on the mound in the second inning and struggled less intensely than Bader had. Joseph Senisi led off with a double, stole third with one out and then scored on a Steve Giustino single.

In the third, NYU was harmed by an error for the first time in the game, something the Violets have struggled with this season — they had 76 errors in 34 games coming into the day. Brendan Pasquale led off with a single, advanced to second on a wild pitch and advanced to third on a sac bunt. He scored when second baseman Jeremy Wayne missed a thrown to the plate. The lead was back to four.

In the bottom of the fourth, NYU scored on an RBI single by sophomore outfielder fielder Christian Bloom that drove home senior catcher CJ Picerni, making it 6-3. This was wiped away by a sixth inning run by the Dolphins that NYU gave away, committing three errors. These mishaps allowed Keith Brodesser to reach base, advance to second and then score.

But the Violets had another comeback in them. Down 7-3, they loaded the bases with two outs in the sixth, making the inning absolutely vital to any hope of a comeback. A wild pitch scored sophomore catcher Scott Hilbrandt and a Spitz single scored Bloom and Walter. Suddenly, it was 7-6.

Unfortunately, that was all for the Violets’ momentum. They were blanked in the seventh. Sophomore fielder Jeremy Wayne reached second with no outs in the eighth, but the Violets were then retired in order. A single from freshman infielder Jack Elias with two outs in the ninth went nowhere and the Violets lost a nail bitter. The team was plagued by inconsistency, especially defensively, according to head coach Doug Kimbler.