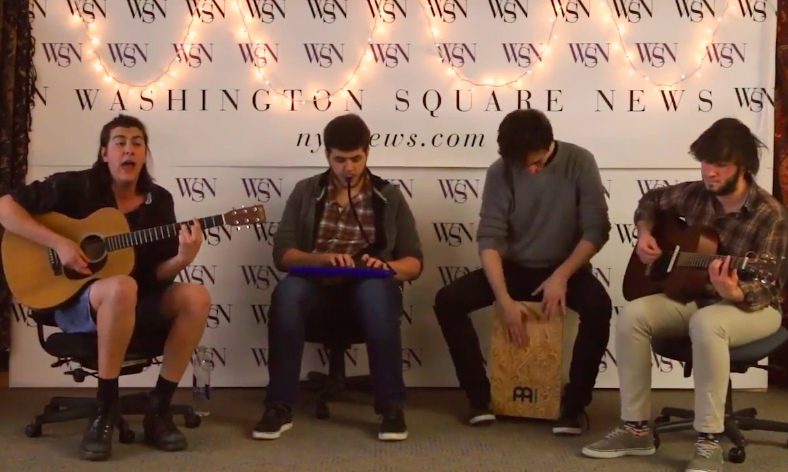 WSN: So how’d you guys get started?

Michael Nitting: We were on Tinder…no I’m kidding. Me and Greg lived in Third North last year, we were just randomly paired up. I sat him down one day and was like ‘I’m going to play you everything that I’ve ever written’. I played him like 4 or 5 songs about like being sad, because it was high school. And then it just kinda like blossomed from there, playing tunes. Actually today is the one year anniversary, we played last year at Dahlia’s, fine Mexican restaurant. R.I.P. They are no longer really running, for a few reasons. We’ll leave those aside. But then, this year I live with Sebastian, it’s been a treat. And then I just texted one day, [Sebastian] plays bass, and I was like ‘I need a drummer’ and he was sitting next to Noah Hadland.

MN: In Keyboard Skills. So fate is a thing, it happened.

WSN: So you’ve been writing songs since high school, before you came to NYU?

MN: I used to do musical theater. I feel like a lot of singer songwriters kind of did that. And then I sorta picked up a guitar, actually I had a German exchange student who taught me how to play a D chord and I was like ‘this is cool’ and then it kinda just spun from there.

MN: Yeah, right! Sounds beautiful. And then me and Greg started writing.

Greg Jakubik: I mean I do like mostly guitar parts, so I’d show them to Michael and he’d show me whatever else he had and we’d piece it together.

MN: Yeah, so it’s pretty collaborative I would say.

GJ: And then these guys [Sebastian and Noah] add their own stuff.

MN: Just add their own style.

WSN: How do you guys think your style, your songwriting process has changed as you’ve added more members?

MN: He’s a composition major, so he likes Bach and stuff.

SZ: So I’m always like, ‘What are you doing structurally here?’ and they’re just like ‘Are you really asking this question? That’s basically how it is.

GJ: So they’re [Sebastian and Noah] both into like classical music and jazz and more serious types of songwriting than Michael and I are both into. So once they joined it was like better to have them look at our songs and be like ‘oh you should try doing this or change that’.

MN: It’s been super instrumental, no pun intended, to like step back and look at music — I’ve never really done that, it’s like ‘why am I playing this chord here?’ which I think is like amazing when you do that, you’re just like ‘oh my god, whoa’. So they’ve definitely been super helpful.

WSN: Who are some artists that you think influence your sound?

GJ: It varies for each one of us. We all have different kind of styles. I know Michael and I both share a mutual love of John Mayer but we have our own tastes aside from that.

MN: All you haters out there. Day one.

GJ: I’m into more rock and blues oriented. And then Sebastian is more jazz.

MN: Noah, what do you listen to?

SZ: I listen to a lot of modern classical music. I don’t know, like experimental music in general and then also hip-hop and jazz.

WSN: So you guys said you’ve been doing shows for about a year now?

MN: Well no not even actually.

GJ: The wildest set that sounded good was Halloween.

MN: Halloween, Invertebrate at NYU, shouts. They did a Halloween set where every band played as a different band. So we hopped on, we played as Daft Punk.

GJ: We had a saxophone player and a keyboardist.

MN: I took off all my clothes by the end of the set. I was like straight in underwear.

GJ: And then two months later, we tried to repeat it but it didn’t go as well.

MN: Yeah, no. We learned some valuable lessons. But yeah so, it’s been awesome.

WSN: What are your current and future plans? Are you guys recording?

GJ: Yeah we actually are.

MN: We’re going to try to get some songs recorded.

GJ: Hopefully a summertime release. So last summer Michael and I put out a little demo we recorded in our bathroom in our dorm of a song called “Off My Mind.”

MN: It’s on our Soundcloud.

GJ: We’re doing a reproduction of that right now that we’re trying to put out in the summer with the full band and everything. Aside from that we’re working on—

MN: Working on stuff. We got some time, Greg’s going to Berlin. (sniffles) So we’re just going to be gigging a lot. We’re going to play one or two shows in the city this summer hopefully. And then we’ll gig just like next fall a lot.

WSN: Do you have any dates that you want to shout out for upcoming shows?

MN: Can we technically — no we don’t have. July 7, hopefully at Knitting Factory most likely. We don’t know yet, that’s like legality issues. We’re playing at Haverford College in Pennsylvania next Saturday, if anyone wants to get on a bus and go to Pennsylvania.

MN: Yes, it should be fun. It’s been interesting.

GJ: We’re fresh off of a little spring break tour right now. So we’re calming down.

MN: Yeah, we’re just kinda hanging out, trying to get in the studio and get some stuff down.

Check out the Misters on BandCamp, SoundCloud and Facebook.