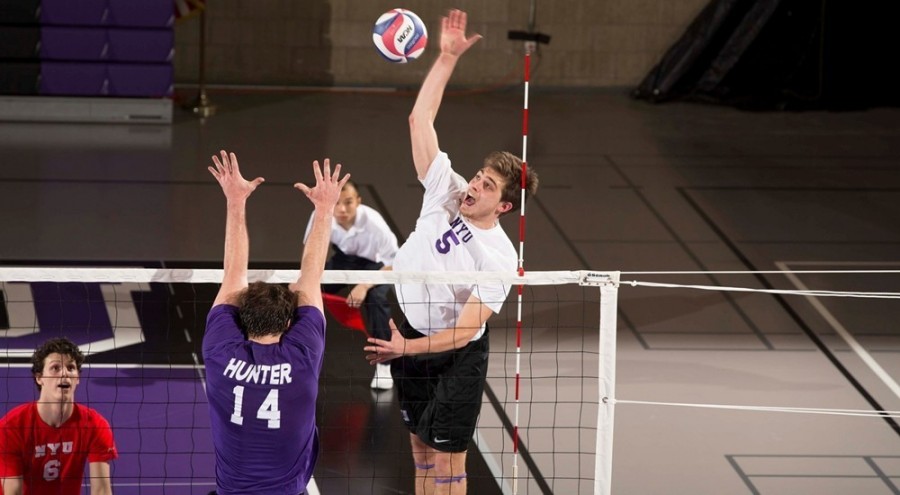 With a .500 record and a number 12 ranking in the latest AVCA poll, the NYU men’s volleyball team played in a tough five set battle against Vassar College in the opening match at the United Volleyball Conference Championship on Friday. They lost the first two sets, won the third and the fourth, but lost again in the final one to bring their season to an end (10-25, 21-25, 25-19, 25-23, 11-15).

Vassar had a strong start which led to their victory for the first two sets, but the Violets picked up the pace and showed their determination when they won 25-19 in the third set and 25-23 in the fourth. The fourth set was close throughout, but thanks to senior opposite Colin LaPorte, they took the set with a kill. By the end of the game LaPorte totaled 10 kills and three blocks. Even in defeat, LaPorte is proud of the team for not going down easily.

“We battled back after losing the first two sets, which showed a lot of resilience but it wasn’t enough to finish them off in the fifth set,” LaPorte said. “It was unfortunate to end the season with what could have been a great comeback, but I am proud of my team for battling.”

Other players that shined in the Violets comeback include junior outside hitter Chase Klein who finished the game with 16 kills, 10 digs and two blocks, only committing five errors. Junior setter Derrick Chiu managed 39 assists and 13 digs, finishing the season as the team’s top facilator. Sophomore libero Benjamin Oxnard tallied 13 additional digs for the team, while sophomore  middle hitter Chase Corbett finished with blocks and junior middle hitter Sean Leahy managed six. Leahy, the Violets’ junior captain, is happy the team tried even if they did not get the outcome they desired.

“Obviously we were not happy with the outcome, but I was proud of the way we battled and came back,” Leahy said. “In the end we came up a bit short, but I think we learned the valuable lesson of the importance of focusing from the very first serve.”

Despite their season being over, head coach Jose Pina agreed that the team still had a great season. Overall, he believes, the players continued to work hard and persevere.

“The team was a bit up and down through the year, but given the strength of our conference, and the level of competition we played, our performance was good,” Pina said. “As for the future, the team only had two seniors and will come back as a stronger unit in 2017.”

A version of this article appeared in the April 11 print edition. Email Ashley Arnold at [email protected]