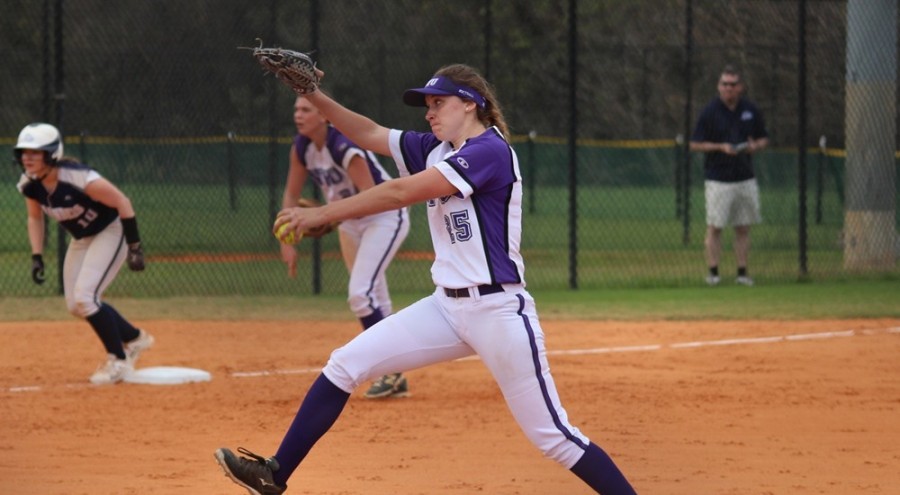 The runs haven’t stopped coming for the NYU softball team — but that’s not always enough. The ladies split a Wednesday doubleheader with the Stevens Institute of Technology on the campus of Fordham University. Runs were frequent during the afternoon, with the teams combining for 28 runs. After dropping the first game 8-5, the Violets hung on to take the second game 8-7.

The Violets started slow in the first, and Stevens jumped ahead 2-0 after taking advantage of two walks in the inning. But NYU came back in second inning to tie the game after freshman utility player Claire Stefanelli tripled junior third baseman Molly Webber home and a Stevens throwing error allowed Stefanelli to tie the score. Stefanelli continued to excel when she homered in the fourth inning. However, Stevens had jumped ahead, tacking on three in the top of the inning. The first came on a sac fly, and Stevens brought home two more with a ground-rule double.

Stevens continued to use its power hitting to stay ahead, adding two runs in the fifth and one more in the sixth. NYU freshman Olivia Mould got one back, tripling home first baseman Cassi Parulis. Parulis returned the favor in the sixth, plating Stefanelli, but it wasn’t enough.

The momentum built in the late innings of the first game carried over. Fired up, the Violets started off the first inning with two runs thanks to freshmen duel-threat Diana King and Stefanelli. The next two innings were scoreless for the Violets, but the fourth and fifth innings proved to be explosive for both NYU and Stevens. Freshman catcher/first baseman Jacqueline Finn started it with a two-run single up the middle, plating senior shortstop Kahala Bonsignore.

Later on in the inning, King struck an RBI double, bringing home junior Marisa Bella to score the next run. Mould scored the following run due to an error. Stefanelli and King scored again, this time unearned. Molly Webber finished off the inning with the last run, making it a total of six by the end of the fourth inning.

Down 8-0, Stevens came back with the same amount of energy leading them to score six runs of their own in the fifth. The team added one more in the sixth inning, but freshman pitcher Karissa Zubalake earned her second save of the season by notching the final two outs. Coach Now-Allah James was pleased with the team’s persistent energy in both games.

“Today we had timely hitting and the pitchers made big pitches in big situations to close game two,” James said. “In game one we were a couple of hits away from breaking that game open. I am proud of the way that we battled all day.”

The Violets will be back in action Sunday, April 3 up against Manhattanville College in Purchase, New York for a doubleheader.