How Not to Visit Florence 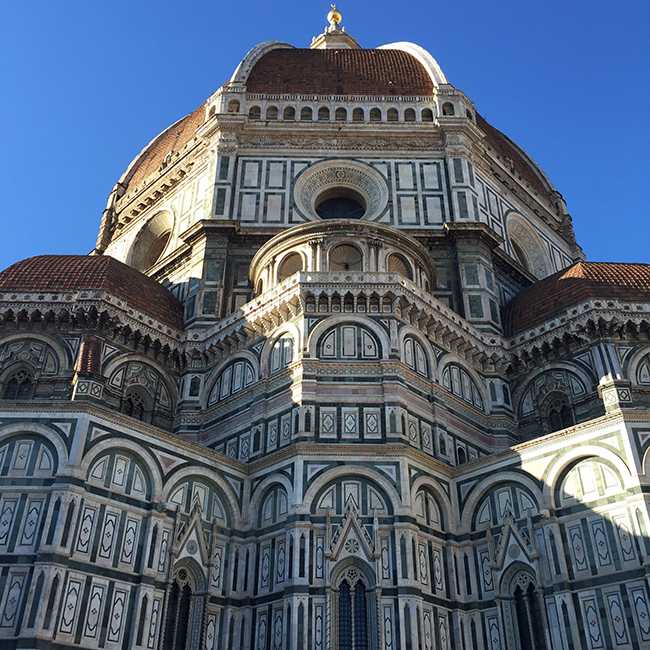 A view of the Duomo in Florence on a clear day.

The first thing you shouldn’t do when preparing for a trip to Florence is to spend absolutely no time learning about the culture or the language. You don’t want to arrive and realize that you don’t know how to say “I don’t know” in Italian.

Next, don’t buy a ticket for 8 a.m. And then definitely don’t trust Google Maps, which will tell you that the buses in London start running at 4 a.m. Because they don’t, so you’ll freak out about getting to Stansted Airport in time.

Don’t drink a large coffee and a bottle of water before getting on the plane, especially if you’re in the middle seat.

If you happen to fly into Bologna instead of Florence because Ryanair only goes to Bologna, don’t mix up a.m. and p.m. when you’re buying tickets. You’re in Europe, so the website will use military time.

When you’re visiting Il Duomo on a beautiful day, don’t expect other tourists to not be the worst people on the planet. Yes, for some reason that couple does need 37 pictures together. I counted.

Should you be visiting the David and find yourself close to a group of basic-looking millennials, don’t eavesdrop on their conversation unless you want to hear questions like, “Is that real marble?” Also don’t forget to take pictures, because walking out of there and realizing you didn’t take a single photo is pretty dumb.

Don’t order red wine if you don’t like red wine, because you’re just going to make that “choking it down” face every time you take a sip and your friend will make fun of you.

When you’re in a restaurant, don’t be offended if the waiter doesn’t give you your check. Unlike the fast-paced environment in the United States, Italians are proponents of long, relaxed meals. But if you are hoping to get the check, don’t just try to make intense eye contact with the waiter for 20 minutes, because he will avert your gaze like you’re Medusa and he’s your ex who just noticed you across the room at a cocktail party. Use Google Translate and figure out how to say “Il conto, per favore.”

Another restaurant tip: don’t sit too close to the bar, just in case a waiter drops a cup and you get showered with glass. You might not get hurt and the restaurant could give you free tiramisu, but it’s still a bit worrying.

Don’t just enter a church because it looks nice and you want to see the inside. There could be a funeral going on.

And finally, don’t leave without eating absolutely everything because the food there is better than anything you’ll find in London. Or in all of life, really.