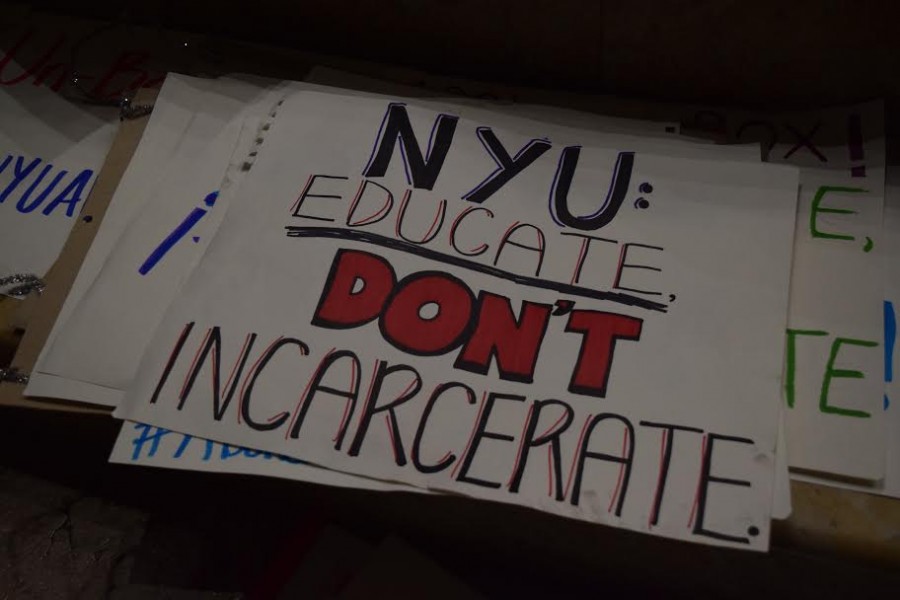 Students remain in Kimmel after staying overnight in protest of the box.

The Incarceration to Education Coalition is currently sitting in at the NYU Kimmel Center to demand the university take immediate action to remove questions of disciplinary action and criminal history from its college applications.

The occupation is centered on the idea of “un-boxing education” — referring to the removal of a checkbox on applications — and how including formerly incarcerated persons demonstrates what an inclusive and diverse university looks like. Various NYU organizations including the Student Labor Action Movement, the Black Students Union and Divest are also occupying in solidarity with the IEC.

NYU had responded to the IEC’s demands in the past, including writing a letter to the Common Application asking the organization to review the impact of the questions and discuss their findings with the university before its next admissions’ cycle. However, the published letter was highly contested by the IEC, as the group argued the administration was only using the letter as a stalling tactic.

Students are willing to put extensive pressure on the university tonight, even after members of the administration warned they could face disciplinary action if they chose to stay in Kimmel past midnight.

Senior Vice President of Student Affairs Marc Wais informed the protestors that the university may hold students accountable for trespassing after-hours if the demonstration continued any longer. In addition, Wais said the university will move forward with their current plans to work with the Common Application to produce research on the validity of keeping the box.

“This building closes at twelve midnight and the building will be locked down, which is normal procedure,” Wais said. “We’re asking that if anyone decides to stay in the building past midnight, we wanted to put people on notice that technically you would be trespassing on private NYU property at that point in time.”

The threat did not deter students as most have gone to make supply runs for food and toiletries, and are preparing for a long night. Additionally, students and members of the NYU community have begun to gather outside the building and draw more attention to the movement.

This is a developing story. Check back here for live updates and make sure to follow us on Twitter.