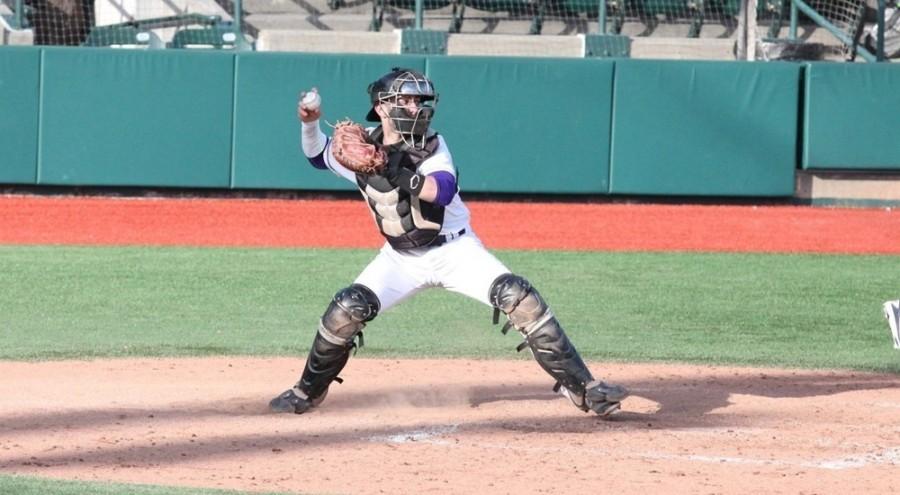 Strong days from senior CJ Picerni and sophomore Matthew Millus couldn’t save the struggling Violets on Friday as they dropped a 7-4 contest against Ursinus College in Brooklyn, handing the men’s baseball team its fourth straight loss.

Ursinus came out of the gate quickly in the first, when Max Jens plated CJ Diana with an RBI single. The Violets failed to answer in the bottom half, as freshman Jack Walter and junior Adrian Spitz both struck out swinging to set the game’s tone. Spitz feels the team struggled due to low energy, giving Ursinus the edge.

“We didn’t come out with the energy we needed to win the game,” Spitz said. “They took advantage of that and really capitalized on all their opportunities.”

Ursinus would go on to score four more unanswered runs, including a two-run blast from Austin Kurey in the fifth, before the Violet bats would wake up. Even then, they didn’t make much noise — CJ Picerni scored in the bottom of the seventh on a double play. Freshman Gabe Bassil recognizes the slow start and sluggish offense affected the flow of the game but has faith the team will come together soon.

“We started off very slow, that’s kinda what killed us,” Bassil said. “We have too much talent on the team not to be winning those kind of games, but I’m not worried because once we figure it out as a whole, we’re gonna be okay.”

Usinus tacked on two more runs in the top of the eighth, putting the score at 7-1 and making a comeback look unlikely. The Violets would not go down quietly, though, as a two-out rally in the eighth kept their chances alive. After freshman Colman Hendershot kept the inning going with a double, and sophomore Jonathan Iaione singled to center to make it 7-2. Picerni did his part, getting on base with a single, and sophomore Jeremy Wayne was walked, loading the bases. Ursinus limped to the end of the inning, walking two runs in to cut the lead to 7-4, before getting Walter to fly out to end the threat. It was NYU’s last chance, as they left 10 runners on base during the game.

In defeat, Millus was excellent for the Violets, throwing a perfect ninth inning with a pair of strikeouts. The closer has been lights out since allowing four runs in his first appearance of the season — he has surrendered just one hit in his last six trips to the mound.

Picerni’s 2 for 3 outing was the team’s best, as he doubled and scored two of their four runs. Sophomore captain Cameron Serapilio-Frank (0-3) pitched six decent innings, giving up six hits and 4 earned runs. Sophomore Christian Pellegrino feels if the team continues grinding and working as hard as they already are, they can do better.

“We are struggling, there is no doubt about that,” Pellegrino said. “We have a long next two weeks, in which we can really make
serious progress.”

The Violets, who stand at 4-10, are facing a rough patch, but there’s still time to improve. They’ll continue their 10 game homestand with a doubleheader against Centenary College on Wednesday,  March 23.

A version of this article appeared in the March 21 print edition. Email Ashley Arnold at [email protected]