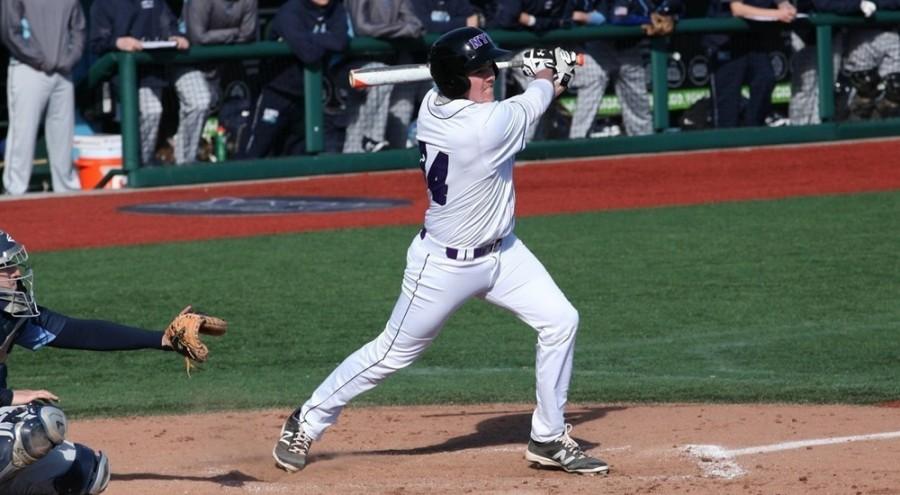 Colman Hendershot was a standout performer for NYU’s Men’s Baseball team despite their loss.

After sweeping John Jay College in last Wednesday’s home game in Brooklyn, New York, the NYU baseball squad headed to Sanford, Florida for the 2016 University Athletics Association Championship tournament. The pitching for both clubs was still trying to find its footing early in the season as the Violets took the fall on Sunday against the University of Rochester in a high-scoring contest, 12-8.

Rochester opened the scoring in the top of the first inning with two quick runs. The Violets were held scoreless through the first four innings as Rochester extended its lead to 5-0. Sophomore Michael Vokulich finally put the Violets on the board, scoring on a wild pitch. Down 5-1, the game was still well in hand. Rochester pulled through with three more runs to stretch the lead to seven runs in the sixth, but Violets senior captain CJ Picerni kept the Violets alive with an RBI single, scoring Jake Smith to make it 8-2. After this, sophomore Jonathan Iaione singled and advanced to second on a throwing error, scoring Picerni and freshman Colman Hendershot to keep the rally going.

But Rochester stayed out in front with two additional runs in the eighth. With the game seemingly wrapped up, an offensive explosion in the ninth kept things compelling. Rochester finished off their scoring with a two-run bomb, giving them 12 runs for the game. The Violets lost, but they did not go down easily. Vokulich homered, and Colman Hendershot doubled down the right field line, scoring freshman Ryan Mclaughlin and freshman Jack Walter. Later on, junior Adrian Spitz singled to the third base, scoring Smith to narrow the gap to just four runs. By the end of the night the Violets had fought hard, but did not get the victory they wanted.

Spitz acknowledged the team didn’t have an ideal day, but is determined that next time the team is on the field they’ll do better.

The Violets will continue in the UAA Championship on Monday, March 7, when they face Brandeis University.

A version of this article appeared in the March 7 print edition. Email Ashley Arnold at [email protected]