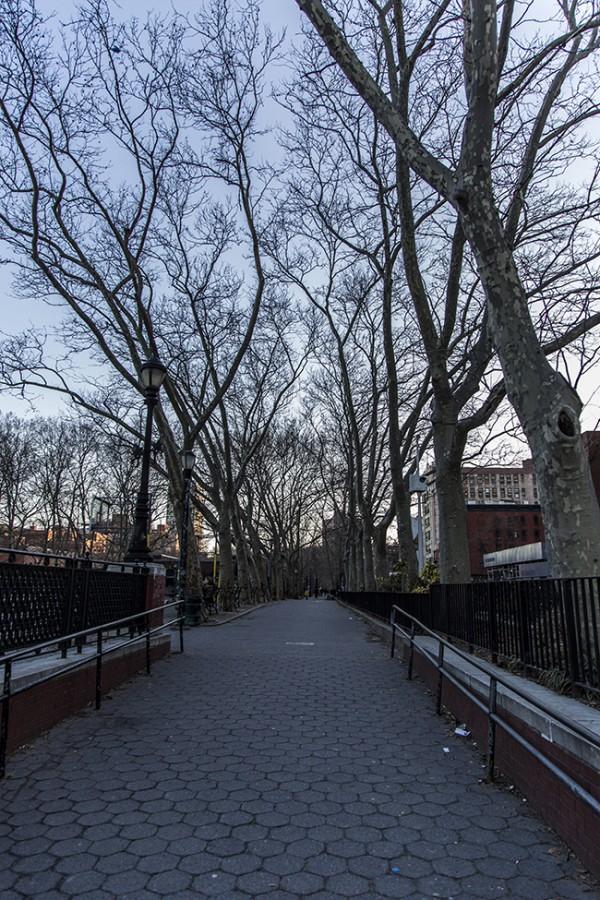 Sara D. Roosevelt Park is a nice place to get some quiet around the city.

Venture to the Silver Towers complex behind Coles Sports Center and you’ll find a giant angular sculpture in the middle of a field of grass. The surrounding buildings, which house NYU faculty members and grad students, block the noise of traffic and lend the area an eerie silence.

NYU owns the entire complex, including the 60-ton concrete sculpture in its center. The Bust of Sylvette, built in 1967 by sculptor Carl Nesjär, is an enlargement of a Picasso sculpture that depicts a woman’s bust. This concrete complex is shielded from the nearby streets and provides a tranquil spot to relax between classes without leaving campus.

Just one block south of Bobst and closed off by a chainlink fence is the LaGuardia Corner Gardens. Once an empty lot, the garden, which was founded in 1981, exemplifies the power of volunteers to rejuvenate an area and to bring beauty into the community. Although access to the garden’s interior walking trails is limited from April through October, you can enjoy the garden from its exterior pathway at any time of year.

The second-oldest church in Manhattan is an Episcopalian place of worship. Between the various burial monuments in the East Yard of the church is a walkable stone labyrinth designed to symbolize the human connection between life and death. On the West Yard of the church, a quiet flower garden springs up around stone paths, benches and more burial vaults. The church grounds are open to the public, so you’re welcome to enjoy this peaceful oasis regardless of your religious affiliation.

In 1931, a courthouse and a women’s prison were nestled together on this plot. In 1967, the courthouse was converted to a public library, and in 1975, a garden took the place of the demolished jail. From springtime through fall, you can traverse a third of an acre of green land containing countless flowers, shrubs and trees, as well as a fountain and a fishpond. For an extension of your quiet jaunt, head over to the Jefferson Market Library on the same plot of land.

Escape the bustle of SoHo by taking a stroll through the three-block park and recreation area between the relatively unpopulated Chrystie and Forsyth Streets. This quiet strip features the M’Finda Kalunga Garden, the Hua Mei Bird Garden, which displays caged songbirds early in the morning, a soccer field and several playgrounds. The tall trees and hexagonal-tiled sidewalks will erase the Manhattan cityscape, if only for a
little while.

A version of this article appeared in the Monday, Feb. 29 print edition. Email Abigail Weinberg at [email protected]