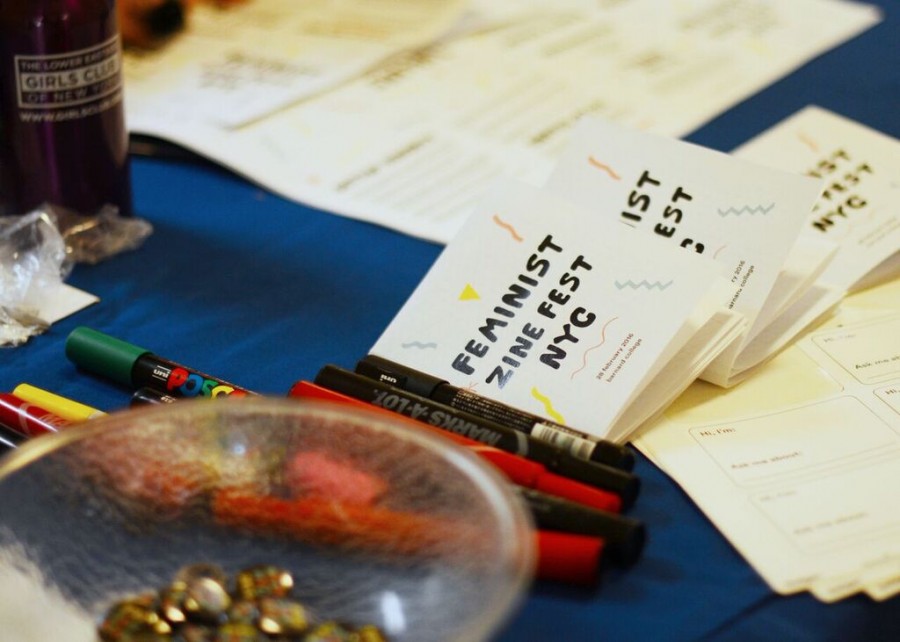 The fifth annual Zine Fest was held at Barnard College on Sunday afternoon as part of its 2016 Feminist Weekend where zine makers shared their feminist-focused works.

Barnard College put on its fifth annual Feminist Zine Fest on Sunday afternoon as part of its 2016 Feminist Weekend. The array of zine makers shared their feminist-focused work across the event’s 65 tables in Barnard’s James Hall. The fest attendees, ranging from Barnard and NYU students to parents with their children, browsed the tables reading and buying zines and related merchandise, including homemade pins, paint strips of fabrics and books.

Zines are small self-published pamphlets which take their name from the last syllable in magazine. According to zine-creator Jonas Cannon, known for his six-issue “Cheer the Eff Up,” the medium is incredibly broad and flexible. And, as Cannon put it, “It’s a zine if you call it a zine.”

Gallatin sophomore Susie Benitez was intrigued by the uncommercial nature of the festival, with authors charging minimally or on a pay-as-you-can basis for their zines.

“The people here are so nice, so talented and everything here is very cheap, which I also like a lot,” Benitez said.

Elvis Bakaitis, a zine maker, and Kate Angell, a librarian at Barnard and formerly a zine librarian at ABC No Rio, created the first Feminist Zine Fest in 2012. Fest organizer Rachel Casiano Hernandez explained the creators saw a genre that wasn’t highly represented at other zine events.

“They saw that there were a lot of zine fest about general issues, but not really a feminist-minded, political zine fest,” Hernandez said.

In a 2012 interview with the Huffington Post, Bakaitis said the original fest centered around the zine makers interpretations of the word feminist. The early participants created zines from those that provide guides to finding abortion providers in states with restrictive abortion laws to zines about women in the punk rock scene.

The wide variety of interpretations of the theme continued in this year’s festival. Victoria Law, a freelance writer and zine maker, displayed her series of zines that recounted the experiences of women in prison. Law started the series, named “Tenacious,” in 2002 because women in prison did not see their issue covered as much as men in prison did. Another table showed off the work of the Dominican Women’s Development Center, which uses zines as a way to teach safe sex in a sex- positive way.

Other authors, such as Ayun Halliday, use their zines to explore more personal issues. Halliday, who has been publishing the zine “The East Village Inky” for the past 20 years, started as a rumination on motherhood after the birth of her
first child.

“I’ve never seen that much representation of it in mainstream stuff. So it’s cool that because of the zine, people who are biracial can make their individual publication express it,” Oehlker said.

A version of this article appeared in the Monday, Feb. 29 print edition.  Email Shiva Darshan at [email protected]