404 Fitness Is Open for Business, Brings Enthusiasm From Students 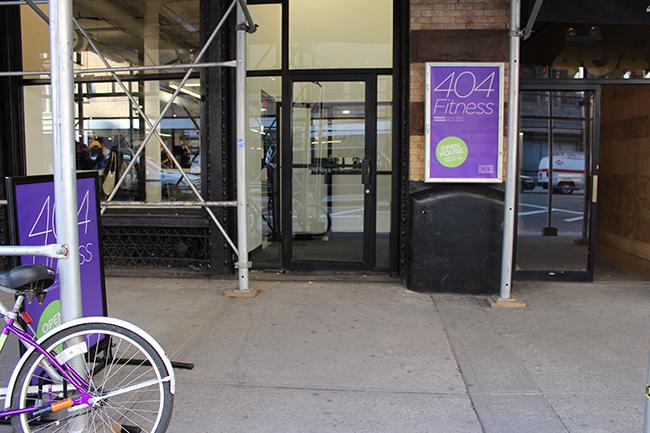 With the closing of Coles, NYU has opened its doors at 404 Fitness located at 404 Lafayette.

After a long, drawn out closure, as of Sunday the Jerome S. Coles Sports Center is finally closed for renovation. Its replacement and NYU’s interim athletic facility, 404 Fitness, opened its doors on Monday.

Located at 404 Lafayette St. between Fourth Street and Astor Place, the new athletic facility boasts three floors in total. Each floor has amenities including cardio equipment, a dance studio and stretching areas.

The renovation of Coles — and consequently the opening of 404 Fitness — is part of the NYU 2031 expansion plan. The new location will provide recreational space for students and faculty while the superblock at 181 Mercer Street — where Coles now stands — is being constructed.

Unlike Palladium Athletic Facility, 404 Fitness does not have a separate weight room. The new facility has an open-floor concept, along with a charging station on the main floor. Although newly constructed, 404 is a more traditional gym in concept, with no basketball or tennis courts.

For Stern freshman Luke Oberholtzer, 404 Fitness was a great experience.

“There’s a lot more room to do stuff,” Oberholtzer said. “I live in Hayden, so [404 Fitness] is much closer. I wanted to see what it was like, and it’s nice. I’ll come back.”

Tisch sophomores Jessica Dukatt and Philip Kenner said they were also excited about the facility, comparing the new facility to Equinox, a private fitness club.

“As a woman, I don’t feel intimidated by the weight room,” Dukatt said. “I was expecting a Palladium scenario, but it’s classy. I’m feeling great about this experience.”

“I don’t like gyms in basements, and Palladium is dark,” Kenner said. “All the light is coming in naturally here and you can look out the window while you work out, and that’s such a huge difference.”

“Auxiliary Gym A is closed a lot [at Palladium],” Hobby said. “It limits a lot of stuff people can do, I think. I’m excited to find out whether or not there’s a lot more space.”

Administrators commented in an email that Palladium Athletic Facility will be accommodating student athletes now that Coles is closed. Christopher Bledsoe, assistant vice president for student affairs and director of athletics said in an email that the Varsity Performance Center, laundry and equipment distribution, sports medicine and team meetings will be moved and held at Palladium.

Bledsoe added that 404 Fitness will remain open after construction of the new building at 181 Mercer Street is completed.

“The Coles Sports and Recreational Center filled a singularly wonderful and important role in the life and growth of New York University over the past 35 years,” Bledsoe said. “Today, we turn the page and look to the future.”