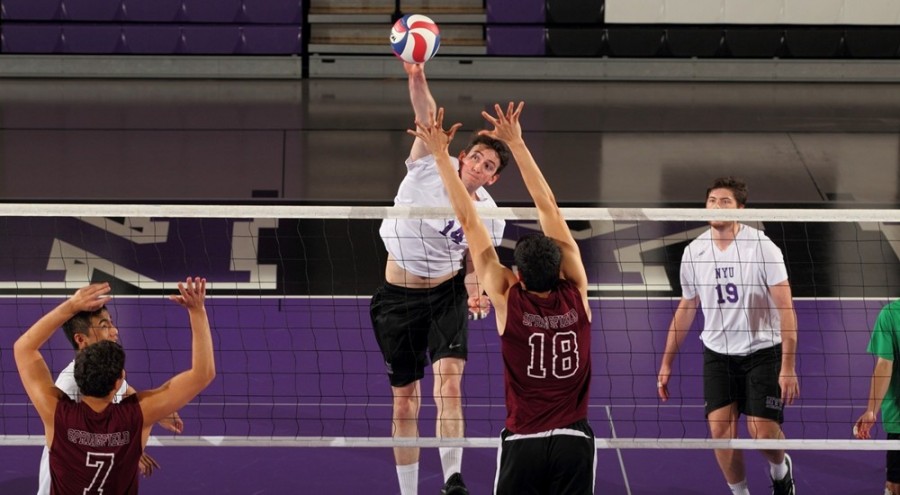 After a disappointing start to the season, the NYU men’s volleyball team entered Saturday’s UVC crossover under .500 and hungry for wins. Fortunately, the Violets were seemingly able to right the ship, winning their first two United Volleyball Conference matches of the year in nail-biting fashion against MIT and Elmira College.

Against MIT, the Violets, ranked No. 8 in the country by the American Volleyball Coaches Association, started quickly, winning the first set, but they dropped the second and third. Down 2-1, the Violets battled back, winning the final two sets of the game for a successful start to the UAA season. Outside hitters senior Nick Benson and junior Chase Klein finished with 17 and 15 kills respectively. They also notched two blocks and six digs apiece. Junior setter Derrick Chiu had a career-best 57 assists in the match, and sophomore libero Benjamin Oxnard ended with five digs, five blocks and 13 kills. Senior opposite Colin LaPorte finished with 13 kills, six digs and two blocks. LaPorte was happy to see his team pull itself out of the gutter after losing a few matches they were expected to win.

“This was a very important weekend for us, not only was it our first conference matches, but we took down two talented teams in five sets each,” LaPorte said.  “It really showed our grit and that all of our work lately has paid off.”

Sophomore middle hitter Chase Corbett was the Violets’ MVP of the game — recording a match-best five blocks, eight kills and two digs. Junior middle hitter Sean Leahy ended with seven kills and four blocks. Leahy knew the Violets had to step up after a rocky start.

“We had a goal of heading home with two UVC wins, and we accomplished that goal, in two five-set matches,” Leahy said. “This was not an easy feat, and we were obviously very tired, so it required a total
team effort.”

Against Elmira, the Violets got off to a rough start. Both teams traded the lead until NYU took the victory. Senior captain Nick Benson notched a total of 20 kills. Oxnard and Corbett both had career highs in this match — Oxnard managed 16 digs and Corbett finished with nine blocks and 10 kills. Senior middle hitter Phil Bueno racked up nine digs, eight kills and two blocks. Chiu led with 49 assists in addition to five digs, four blocks and two kills. Chiu said the team struggled due to sickness and lack of practice, but still managed to get the win.

“I would say this weekend we didn’t play our best for sure because a bunch of us were sick and we haven’t had a real practice in over a week,” Chiu said. “We showed a lot of tenacity and determination to win, which helped us mount comebacks in both games.”

The Violets next play on Wednesday, Feb. 17 in a match against the always-difficult Stevens Institute
of Technology.

A version of this article appeared in the Feb. 16 print edition. Email Ashley Arnold at [email protected]