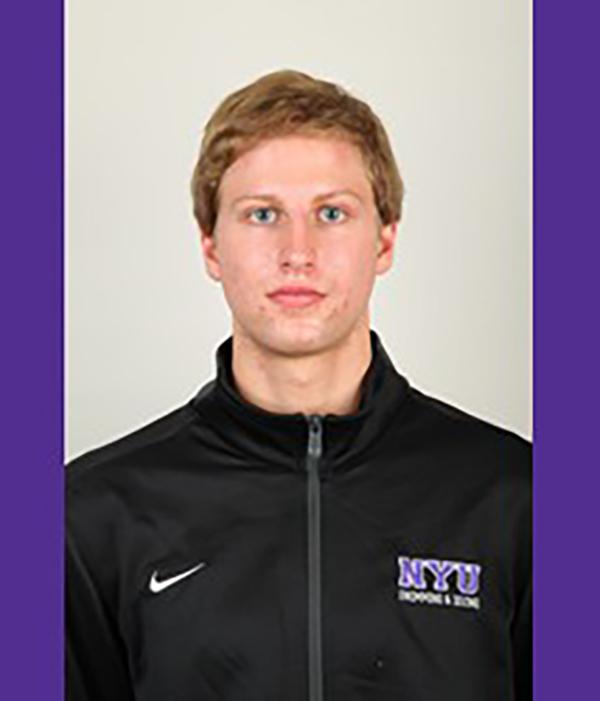 NYU swimmer, Max Phillips, who injured himself last October is finally back and swimming better than ever.

If there’s one thing life teaches you, it’s that anything can happen. Unfortunately, on occasion it seems as if the planets are in alignment against someone. Case in point: NYU junior Max Phillips.

In late October of 2015, Phillips — a member of NYU’s swimming and diving team — was injured and rendered unable to swim for roughly a month due to an almost comical sequence of events. On his way to pick up a check at a payroll office near Union Square, Phillips tripped over a zip-tie, and suffered a non-displaced hairline fracture on the tip of his radial bone. Phillips finds the story quite embarrassing, but has also come to terms with the humor of his fall.

“I step on it and it flips up by 90 degrees, and I take another step and I get snagged in it and it lassos around my feet and I fall right onto my elbow right in the street,” Phillips said. “I’m from Colorado, so you would think I would break something snowboarding or mountain biking, but no, it was because of a zip-tie in the middle of an intersection.”

Fortunately, the crack occurred at the very end of his elbow, making for a relatively speedy recovery. His training options were limited, restricting him to mostly legwork due to the athletic trainers’ concerns. They didn’t want to rush him back and aggravate the injury, and even when he finally made it back into the pool over Thanksgiving break, he still wasn’t 100 percent. Training with his club team for a few days to keep in shape, Phillips was able to pick and choose what he wanted to do, such as kick work designed to keep the pressure off of his elbow.

Getting back into the rhythm of his usual routine, Phillips continues to balance his passion for film and his love of swimming. He was drawn to NYU because its program allows students to have full access and rights to their work in the film program, unlike his other choice at the time, the University of Southern California.

“I study film and television at Tisch as well as the business in media and television minor over at Stern,”  Phillips said. “Between the academics and swimming, I thought NYU offered the best combination and balance between the two, much more so than USC did.”

After he graduates, Phillips hopes to work as an art director or a production designer on film sets. Phillips is happy that his minor will give him a background in business, which will be useful if he decides to fall back on producing or marketing within the industry.

The swim team is very tight-knit community, especially during NYU’s January term, during which the athletes are required to remain in the city. Thankfully, they enjoy hanging out with each other beyond classes and swim practices.

“The swim team is like a really big family in a lot of ways,” Phillips said. “We’re always looking out for each other, especially in practice, really trying to push each other to do our best.”

When he’s not knocking out a few laps in the pool, Phillips is actively participating in on-campus activities, such as the College Republicans group and Super Smash Brothers Club. Through his many twists and turns, he remains an active and dedicated member of the university, avoiding zip-ties at all costs.