What You Need to Know about UltraViolet Live 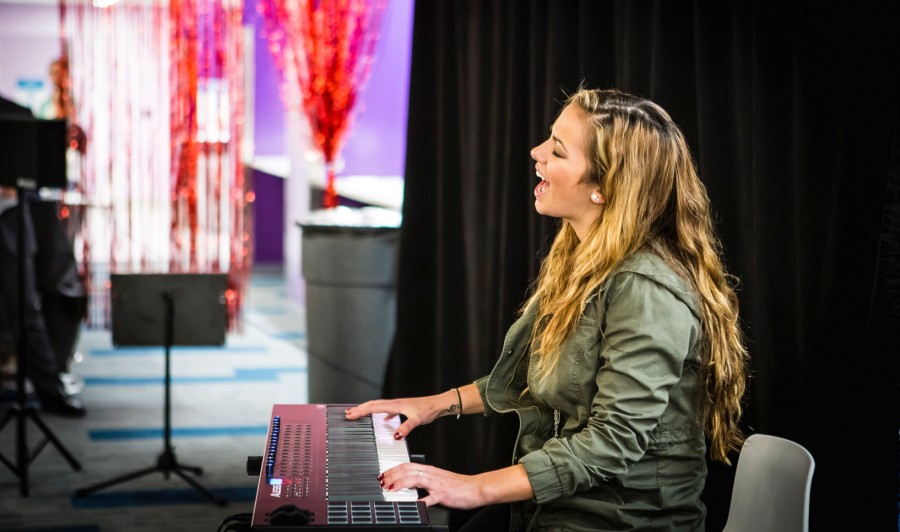 Andrea LeClerc showed of her prowess as a pianist/vocalist last year in the UVL preliminary rounds.

NYU’s most talented performers will compete for cash prizes in the annual UltraViolet Live talent show at the Skirball Center for the Performing Arts Feb. 25. The 15 acts selected for the final round include a poi light performance, a bongo drummer, a number of singers, musical theatre performers and classical musicians.

Preliminary rounds for this year’s competition were held by each of the residence halls, the Commuter Student Council, NYU Abu Dhabi, NYU Shanghai and, for the first time ever, the Inter-Greek Council.

“Both the commuters and the IGC have a representative, which will be really cool to see with all the other halls,” said Walker Chabbott, President of the Inter-Residence Hall Council, which is hosting the event.

The competition is a unique opportunity for NYU students to distinguish themselves from their talented peers while creating bonds within their residence hall communities. Gallatin freshman Crystal Speros won fan favorite and second place overall in the Rubin competition for the performance of her original song “Flower Bouquet.”

“After performing I felt so much support from my dorm mates. it was wonderful to play in front of an engaged audience,” she said. “Playing music allows me to be vulnerable in a way that everyday speech cannot, and helped me to open up to my dorm mates.”

The event will showcase the wide variety of talent among NYU students. ”We have a lot of people doing different types of things, so I think that will be really nice just in terms of diversity,” Chabbott said. “You won’t have 15 opera singers singing the same song or 15 pop singers.”

The competition has yielded a series of notable contestants since its conception in 2003. In 2005, Tisch freshman Stefani Germanotta, better known as Lady Gaga, took third place for her performances of the original songs “Captivated” and “Electric Kiss.” Another UVL success story is Brandyn Burnette, the 2009 winner who went on to sign a music deal with Warner Bros.

The final competition will feature a panel of celebrity judges. Although their names cannot be released until their contracts are finalized, students can expect to find a full list of judges and finalists on the IRHC Facebook, Twitter and Instagram pages in the coming weeks. Past judges include Lea Delaria of “Orange is the New Black,” Jack Falahee of “How to Get Away with Murder” and Manila Luzon of “RuPaul’s Drag Race.”

“I think it will be a really great show and I definitely encourage everyone to come out,” said Chabbott.