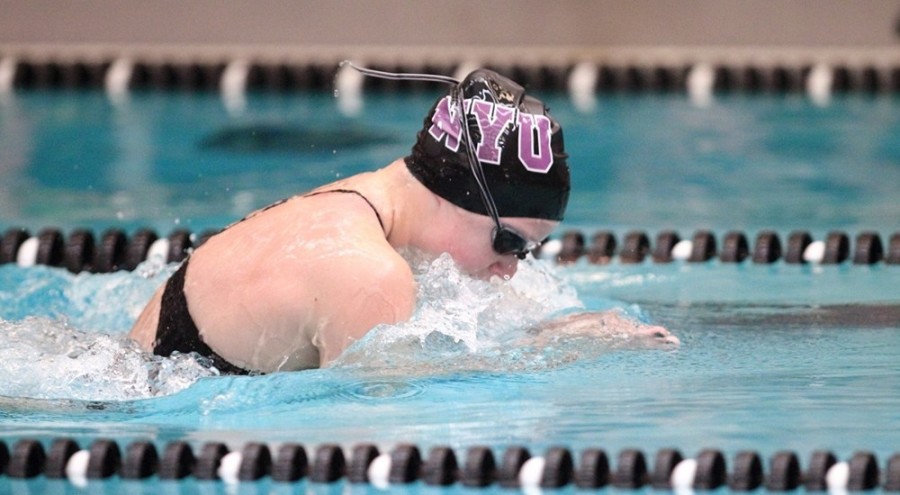 The NYU Violets showed they are capable of greatness at the Massachusetts Institute of Technology Invitational this weekend. The men’s swimming and diving teams managed to land in second place, just behind MIT, while the women’s teams took first.

In the 200-yard butterfly junior Phillip Kang managed to break a record in a time trial with a NCAA-qualifying time of 1:49.45. Freshman Matt Lyn, along with sophomores Adam Betts and Chad Moody also achieved NCAA cuts. Moody was impressed by the team’s massive improvements that earned them a slew of new team records.

“We’ve all been training really hard and it’s definitely showing by all of the team records that have gone down and NCAA cuts that have been made,” Moody said.

The women’s swimming and diving team earned 140 points on day one, good enough to place them in second going into the second day. Junior captain Elise Gibbs broke the NYU record in the 50-yard freestyle with a NCAA-qualifying time of 23:38. This record beat the previous one set by sophomore Isabelle Kitze last year.

Freshman Haley Wen achieved a NCAA B-cut when she won the 1,650-yard freestyle. Sophomores Kitze, Hannah Bergh and Serena Yan, along with freshman May Li, took third place in the 800-yard freestyle.

Yan said that the team has had difficulty when swimmers have had to compete in more than one session, but nevertheless, she is proud of the way the team has responded to the demanding season.

“It’s not an easy meet, some of us are swimming five different sessions,” Yan said. “I’m so proud of our team for pushing through and dropping amazing amounts of time.”

Much like the men’s squad, the women’s diving team kept pace with the performance of the swim team. Freshman Kelly Ryser took second in the 11-dive one-meter competition. Sophomore Austin Campitelli, who was a staple of last year’s squad and is looking to get back to Nationals this year, finished just behind her in third.

In day two of the competition, the men’s team remained in second place with a total of 706 points, still behind MIT. Kang broke yet another record, this time for the NYU 400-yard individual medley. Sophomores Joe Baron and Chad Moody, alongside senior Win Htet Oo and junior captain Daniel Tay made the NCAA B-cut in the 200-yard freestyle. Sophomore Adam Betts took first place in the 100-yard backstroke and said he is excited to see both teams’ hard work pay off.

“The team has been working hard for a few months and we’re really seeing the payoff at this meet,” Betts said. “To achieve so many team records and national qualifying cuts at a mid-season meet is very encouraging and I’m looking forward to continue working together as a team towards NCAA championships.”

The women’s team performed well enough to vault themselves into first pace on day two of the meet. They finished the day with 727.5 points, three points ahead of Columbia. Li took third place in the 100-yard backstroke. Li and Gibbs also participated in the 400-yard medley relay team with Kitze and freshman Noel Leung.

The teams now have a long layoff before their next meet. Winter break will keep them out of the pool until Jan. 16 when they host Springfield College for senior day.

A version of this article appeared in the Dec. 7 print edition. Email Ashley Arnold at [email protected]