Vigil held for citizens of Palestine 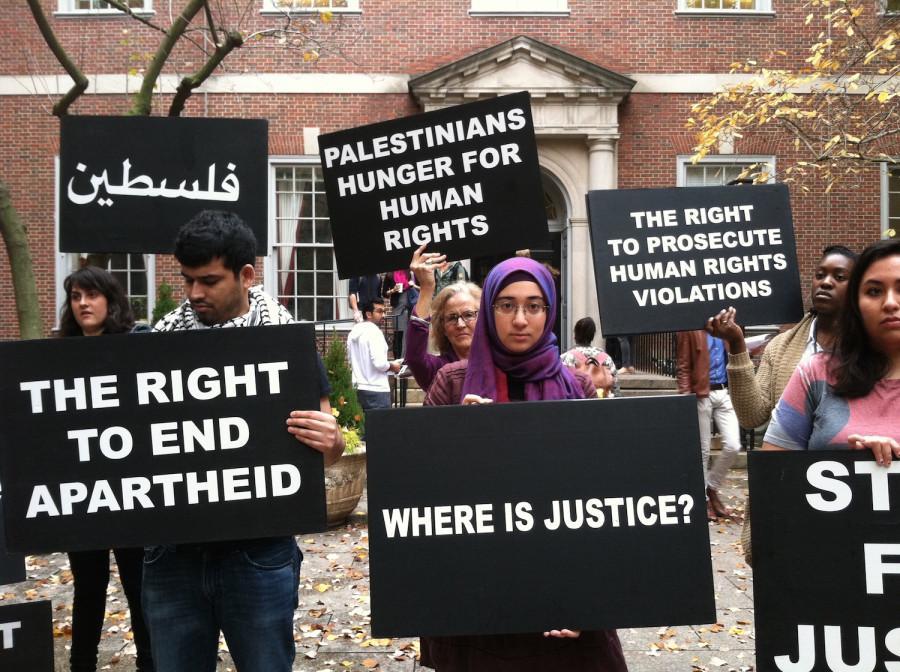 Students vocalized their dismay towards a feeling of anti-Palestinian culture within the NYU Law School on Friday.

NYU Law students gathered for a silent vigil on Friday to show solidarity with Palestinian citizens in their ongoing struggle with Israel. The vigil, held in the NYU Law’s Vanderbilt Courtyard, also aimed to bring attention to Palestinian suffering and the Law School’s alleged pro-Israeli sympathies.

Students brought large, black signs, handed out flyers and posed for pictures. The event was sponsored by Law Students for Justice in Palestine, one of NYU Law’s newest student advocacy groups, according to Law student Colinford Mattis.

“Law Students for Justice in Palestine was one of several new student groups created last year. It tries to open a dialogue about the Palestinian-Israeli Conflict,” Mattis said. “LSJP does advocacy work and strives to raise awareness.”

“Today’s event was prompted by recent activities on Palestinian land, in particular the extrajudicial killings of Palestinian citizens,” Rizvi said.

In addition, said Law student Amith Gupta, the effort to raise awareness was further spurred by a series of emails exchanged between law students.

“I called for vigils like this after the aggressive response I and other students received for forwarding emails from the organization New York City Students for Justice in Palestine,” Gupta said. “The forwarded email showed solidarity with the Palestinians during their recent uprising against the Israeli occupation.”

Gupta also pointed to NYU Law’s adoption of Thane Rosenbaum’s Forum on Law, Culture & Society in 2014 as evidence of the school’s animosity toward Palestinians. In a July 2014 opinion piece for the Wall Street Journal, Rosenbaum suggested that all citizens of the Gaza Strip could be considered combatants.

“On some basic level, you forfeit your right to be called civilians when you freely elect members of a terrorist organization as statesmen, invite them to dinner with blood on their hands and allow them to set up shop in your living room as their base of operations,” Thane wrote at the time. “At that point you begin to look a lot more like conscripted soldiers than innocent civilians. And you have wittingly made yourself targets.”

Rizvi agreed that she felt the presence of a pro-Israeli bias on campus, but saw promise in the student organizations.

“At times it has been a struggle for pro-Palestinian advocates on campus to speak out in a meaningful way,” Rizvi said. “However, the administration has been supportive. We are one of very few law schools with a group like Law Students for Justice in Palestine.”

Gupta also noted pro-Israeli sentiment on campus and suggested that it occasionally veered into hostility.

“The community here can engage in a culture of dehumanization of Palestinians and others in the Middle East,” Gupta said. “Pro-Palestinian students can be called anti-semitic or branded terrorist sympathizers. This language can have a chilling effect on students’ willingness to participate in discussions and express themselves. By speaking out we are doing our best to address it.”

Mattis also said organizations like LSJP could have positive effects on community discourse.

“I am interested in supporting activities that can bring a voice to the marginalized,” Mattis said. “In a diverse and academic community like NYU Law, we need to stand up for cultivating discourse. We need people to feel empowered to engage.”

A version of this article appeared in the Nov. 9 print edition. Email Thomas Peracchio at [email protected]