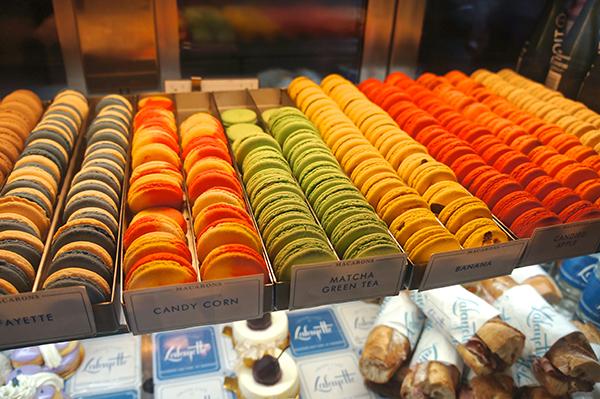 The changes on the menus of New York City’s best bakeries are the real fall transition you should be excited about. Here are a few of the treats you should not miss.

Molly’s Cupcakes is a tried and true favorite of NYU students. In addition to the peach cobbler cupcake they offer year around, Molly’s recently debuted pumpkin spice and tiramisu cupcakes. The highlight of their fall menu, however, is an apple pie cupcake. The treat consists of fluffy cinnamon cake in miniature pie crust-stuffed with apple pie filling and topped with homemade whipped cream. This modern take on the classic American dessert, as well as most of Molly’s other creations, can be ordered as a cake that would make the perfect addition to any Thanksgiving spread.

Located just a few blocks from the NYU, Lafayette is part classic French bistro and part speciality bakery. In addition to their menu of French classics, they offer a special assortment of cakes and pies designed to be served alongside your holiday feast. Though Lafayette’s desserts are on the pricy side, their quality is unmatched. The $54 Apple Pie Elevée, a French-style tart crust filled with Gala and Granny Smith apples and fall spices, never disappoints. For a smaller treat, stop by the bakery to pick up a candy apple macaron or a pumpkin pie eclair.

Tu-Lu’s Gluten Free Bakery has a reputation as a safe haven for vegans and those who suffer from food allergies. For the next few weeks be sure to stop by Tu-Lu’s to enjoy one of their gluten, dairy and egg free fall cupcakes of the week. Recent flavors have included cookies and cream and apple spice with cinnamon cream cheese. This week, Tu-Lu’s is featuring a candy corn cupcake alongside apple cider donuts.

New York City-based chain Magnolia Bakery offers a wide assortment of fresh, made-from-scratch desserts. Magnolia is currently featuring their pumpkin spice cupcake made with dried cranberries and caramel cream cheese icing. Every Monday in November they also have a harvest apple cupcake complete with fresh apples, cranberries, raisins, pecans and meringue buttercream frosting — the perfect way to honor the end of apple picking season. Although they do not have any special, family-sized desserts for Thanksgiving, any of their standard pies, cakes or icebox desserts are sure to do the job.

Opened just last month, The Donut Project has already made quite a splash with its unconventional donut creations. Their year-round offerings include a beet-glazed donut stuffed with ricotta cheese and the “Bulletproof Tiger,” a pineapple donut drizzled with habanero glaze. The bakery also introduced a cinnamon donut with roasted pumpkin seeds and a donut topped with salted chocolate and buttered pretzel for the season.

A version of this article appeared in the Nov. 9 print edition. Email Taylor Nicole Rodgers at [email protected]