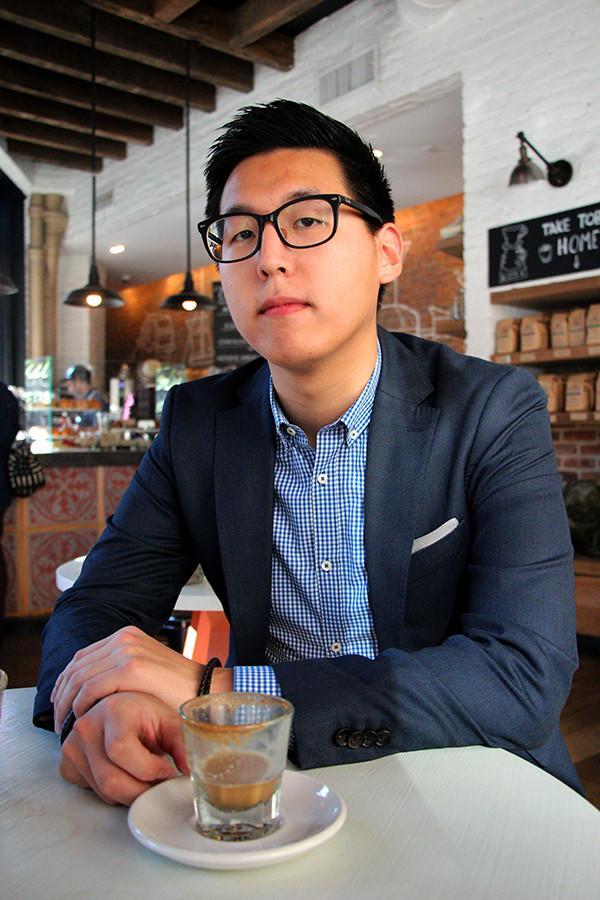 Arnold Byun, founder of the coffee club at NYU, spoke with WSN writer Tiffanie Hwang in a coffee shop near NYU last Thursday.

Once you look past the foam decor, there is a greater art form behind the common morning latte.  As founder and president of NYU’s Coffee Club, SPS junior Arnold Byun wants to share and help other NYU students familiarize with the involved brewing and roasting techniques.

“When I started Coffee Club, I wanted to create a club to form a community and raise awareness to this speciality coffee that was more than just a commodity that people were used to,” Byun said. “Rather than changing the way people drink coffee, the club is aimed toward introducing others to a new way of perceiving coffee and demonstrating how there is another way to drink it — which is to drink it black.”

Rather than hosting weekly meetings, the Coffee Club plans frequent events such as tastings, special tours of cafe roasteries and workshops where members can brew their own coffee. The club has grown to the point where coffee brands and cafes will reach out to Byun to work with the organization.

Reflecting on his own experience with coffee, Byun admits that he had previously not been on the bandwagon of coffee drinkers.

“I actually didn’t drink coffee at all until I came to NYU,” Byun said. “I actually hated it in the beginning because of the bitter taste and didn’t even know how to interpret the different coffee selections on the menu. Espresso was my first coffee beverage and it was not a good experience.”

His interaction with coffee started when he noticed many of his hangouts and meet-ups with friends would end up being in coffee shops.

In an effort to learn more about coffee and familiarize himself with it, he decided there was no better way to do so than to work in a coffee shop himself, at the well-known Blue Bottle Cafe, located on the High Line.

He was then enrolled in a 2-week training program, learning everything from steaming milk, pouring espresso and, most importantly, what coffee truly entailed and the different nuances of the drink. This experience sparked his interest and fascination upon discovering that there was a lot more to coffee than meets the eye.

Byun also shared advice to those on a budget who wish to make coffee at home.

“The best way would be to start off with a hand grinder rather than a grinding machine, a kettle with gooseneck for a more controlled pour, such as one from Hario, and a brewing machine — my favorite is the Chemex,” Byun said.

Byun hopes to continue his mission in helping others enjoy quality, simple coffee.

“It’s always such a fun experience and pleasure for me to hand over a cup of coffee that I freshly brewed to a student and see their responses of, ‘Wow, this is really good,’ and see their surprised faces when they learn it doesn’t have any sugar or cream, but is simply a cup of freshly brewed coffee,” Byun said.

A version of this article appeared in the Monday, Oct. 26 print edition. Email Tiffanie Hwang at [email protected]