Larson and Tremblay shine inside the ‘Room’ 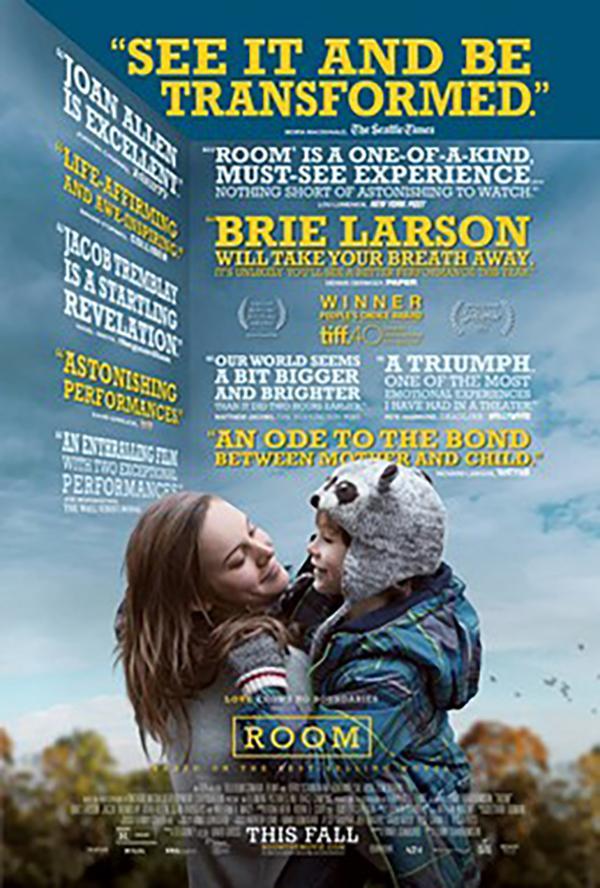 Room is a 2015 Canadian-Irish drama film directed by Lenny Abrahamson based on Emma Donoghue book of the same name.

Brie Larson’s rise to acting prominence has been a remarkable showcase of her wide-ranging capabilities, from intense drama as a supervisor at a group for troubled teens in “Short Term 12” to comedy as Amy Schumer’s sister in “Trainwreck.” Her latest role as Joy Newsome in “Room,” directed by Lenny Abrahamson, is her best yet — a stunning display of the psychological effects of trauma and the universal anxiety of motherhood.

At the start of “Room,” Joy has lived captive in a garden shed for the past seven years by a man referred to only as Old Nick. Her 5-year-old son Jack (Jacob Tremblay) was born inside the shed and has no understanding of the world outside. In fact, the information given about their situation is told from the narration and perspective of Jack. In his opening lines, he explains that there is nothing outside “room,” only outer space and heaven. The viewer comes to understand that Joy has hidden the true extent of their suffering from him to allow him to be happy.

Abrahamson commits to aligning the film with Jack’s perspective. His method of shooting, with very few wide shots, primarily having close-ups of objects or faces, makes the room feel much bigger than it actually is — as a child would feel if he had not known anything outside that space for his entire life. Jack narrates his fantastical dreams and innocent imaginings of heaven. The world Joy has constructed for him allows him to maintain his childhood, despite their circumstances.

When Joy believes they have a chance to get out, she must tell Jack about the opportunities beyond the locked door. Tremblay shines in these scenes as he comes to terms with the complete reversal of his understanding of the world. During their escape — featuring an exhilarating sequence that’s one of the most heart-pounding in recent memory — there’s an emphasis on the brightness and coldness of the outside world. Jack is scared and confused; he yearns to go back to the simple existence he and his mother had and asks her multiple times when they will be going back to the room. Beyond a few scenes of overexaggerated family tension between Joy and her parents, the second half of the film is just as emotionally powerful as the first as it explores the psychological and social effects of their transition into society.

There’s something about being thrust into the perspective of a child that makes “Room” a meaningful and beautiful experience, despite the fact that the events depicted are stressful and upsetting. The film becomes a powerful and distinctive narrative of an early loss of innocence, with terrific lead performances and cinematography that beautifully captures what it would be like for a child to experience the world for the first time.

“Room” is currently playing at the Angelika Film Center on 18 W. Houston St.