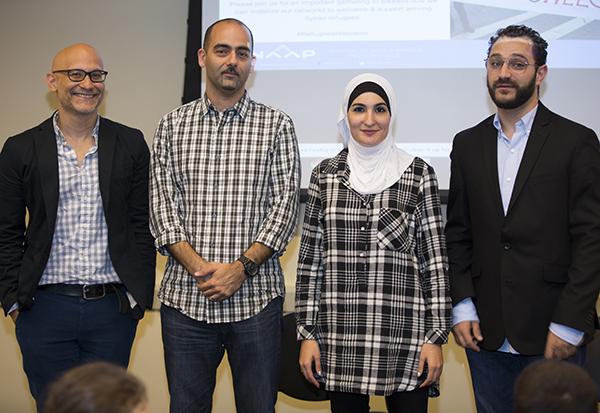 Gerrard Khan, Sarad Al-Jijakli, Lind a Sarsour, and Ridwan Adhami discuss how Syrian refugees can be helped in the United States.

In an attempt to tackle the issues countless Syrian refugees face on a daily basis, the Islamic Center at NYU held a semi-annual town hall meeting Monday. Speakers like Linda Sarsour, the executive director of the Arab-American Association of New York, and Ridwan Adhami, the Islamic Relief USA creative director, exchanged ideas that will prepare the nation’s communities to welcome refugees.

Sarab Al-Jijakli, the national president of the Network of Arab-American Professionals, organized the event. He said many members of the New York City community want to ease the plight of refugees, but don’t know how to get involved.

“We feel like we’re so far away from a lot of the motion, a lot of the action and the support,” Al-Jijakli said. “There is a role we can play. We as a community can work together to be involved.”

Additionally, Adhami explained that people must fully understand the process that refugees face in order to help. Often, when refugees first arrive in Greece, they need medical attention. However, in addition to their physical needs, they require compassion.

After reaching Greece, the refugees will travel 70 kilometers by foot to a port city, where they will take ferries to Athens. Once safely on the mainland, they will travel to countries like Germany and Sweden that have opened their borders. They won’t necessarily speak the language, understand the monetary system or know how to become employed — but many have no other option.

Being integrated into society is painstaking in the United States as well. Becoming a resident takes three years and involves interviews, background searches and screening by multiple agencies. Afterward, the International Rescue Committee will only support them for a few months.

To help, Al-Jijakli and the NAAP suggest that the community offer monetary donations, mentoring and volunteer operations to organizations like the Arab-American Association of New York. There is an overwhelming need for support, but the help of the New York community would go a long way. Sarsour called upon the individuals in the audience to take a stand.

“We are trying to create local welcome committees,” Sarsour said. “This is the evolution of our community, brothers and sisters. We just need people like you.”

Many audience members took the disheartening tone of the evening as a call to action. CAS freshman Michael Ho said the town hall meeting motivated him to become more involved by opening his eyes to the severity of the refugee crisis.

“As students, we get very distracted with classes and responsibilities. And because of that, we forget about what’s going on in the world,” Ho said. “This has just made me want to do more: to tell people, to help.”

This was exactly Al-Jijakli’s aim with this event. He said he wants to enlighten the public and to build a network that will combat the trauma these refugees face.

A version of this article appeared in the Tuesday, Oct. 13 print edition. Email Raven at [email protected]