Idris Elba shocking in ‘Beasts of No Nation’ 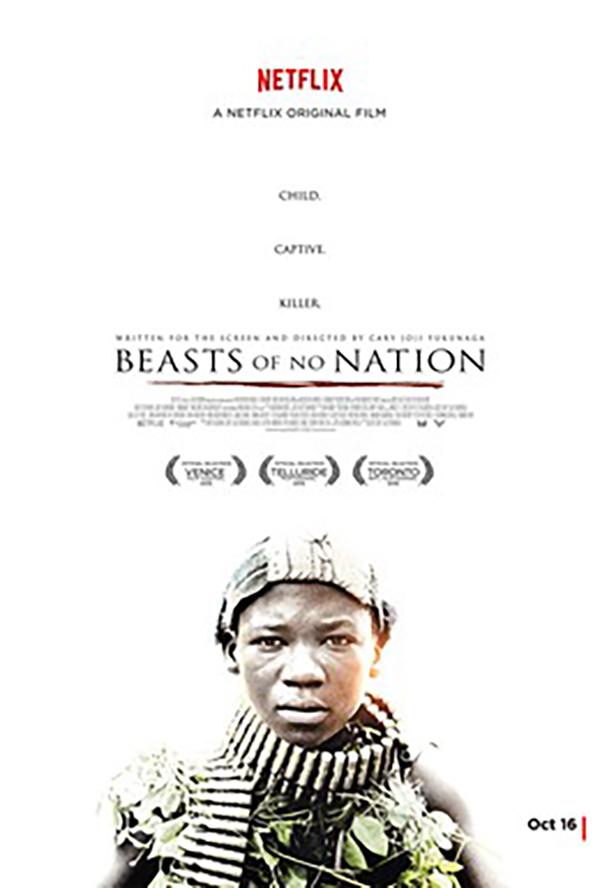 “Beasts of No Nation” is a 2015 American war drama film portraying the experiences of a young boy who survives as his country, Ghana, goes through a horrific war.

It seems that the next step in Netflix’s ongoing plan to conquer every form of entertainment is releasing high budget, dramas on its streaming platform simultaneously with a theatrical release. Tisch alumnus Cary Fukunaga’s “Beasts of No Nation” is the first foray into this uncharted territory and it is certainly a bold choice. Based on the 2005 novel of the same name by Uzodinma Iweala, the film is a disturbing account of the indoctrination and exploitation of a child soldier in an unnamed African country. It’s a technical marvel, but it has a flawed story that falters when the scope is expanded beyond the experience of one boy.

Fukunaga, most recently known for his work on the first season of “True Detective,” brings a similar unnerving sensibility to the story of Agu (Abraham Attah). When the film opens, Agu is living happily with his family in a country that is beginning a long civil war. Soon, government forces arrive in the village and kill Agu’s father and brother, forcing him to flee and find a group of rebel mercenaries led by the Commandant (Idris Elba). The Commandant takes Agu on as a protege and manipulates him to think killing anyone they see is a way of taking revenge on those who killed his family.

The images onscreen are haunting and unforgettable. Fukunaga deftly portrays the brutality of the war with sharp and well-placed bursts of color that contrast the otherwise dull landscape. This includes a particularly harrowing one-take tracking shot that follows Agu as he invades a home with other soldiers and believes he sees his mother.

While the startling images and production design leaves a lasting mark on the viewer, Agu’s story does not. This is not the fault of Attah, who subtly uses his facial expressions to show Agu’s initial terror at the traumatic events around him and his gradual descent into brainwashed numbness. Instead, the film shifts focus halfway through, taking on the point of view of the Commandant. Elba is fantastic as the abusive and vicious commander, but the emotional power of the film is lost when Agu’s plight is forgotten about. In the end, the story comes back to Agu but the shifts in perspective detract from the emotional resonance and power of the ending.

The film’s account is resonant of Ishmael Beah’s memoir “A Long Way Gone,” a narrative of his experiences as a child soldier in Sierra Leone. Directed by an American filmmaker and starring a British actor, the film deserves credit for not exploiting the experience of a child soldier for white-washed heroism. Instead, “Beasts of No Nation” is emotionally exhausting and powerful yet imperfect.

“Beasts of No Nation” will be released on Netflix and in select theaters this coming Friday.

A version of this article appeared in the Oct. 13 print edition. Email Zach Martin at [email protected]