Women’s soccer rolls on to make it 8 straight 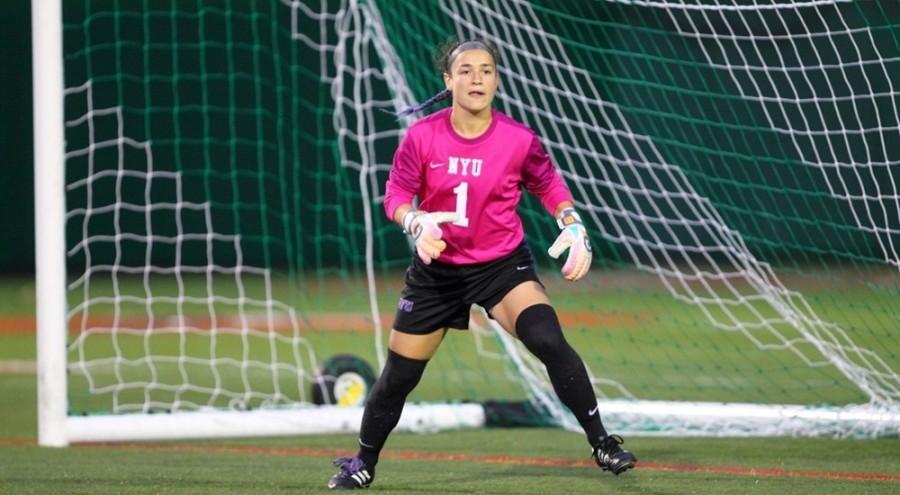 Steinberg recorded another shutout for the Violets.

Women’s soccer kept its streak alive on Monday, beating Brooklyn College by a comfortable 3-0 margin to win their eighth game in a row and push their record to an impressive 9-1. Junior goalkeeper Cassie Steinberg didn’t have to work at all en route to her seventh shutout of the season. The Violet defense didn’t allow a single shot over the full 90 minutes.

The scoring started in the 23rd minute when freshman defender Royce Light netted a goal off an assist from junior midfielder Lexi Clarke to give the Violets a 1-0 advantage. Senior defender Maddy Clappin scored the second goal, connecting on an unassisted goal into the top right corner of the net. Sophomore forward McKennah Spagnola scored an unassisted goal — her team-leading third of the season — during the second half at 66:05. This was the third and final goal of the night.

“I think our team had a really good showing today and you can really see all of our hard work finally come together,” Spagnola said. “Our passing combinations and just the flow that we got into today was fantastic.”

Steinberg’s shutout was the second in a row in which she didn’t need to record a single save, attesting to the strong defense of the Violets. Clarke’s assist was her second for the season, which ties her for the team lead. After a successful sophomore campaign that earned her a tryout for the Ecuadorian national women’s soccer squad, Clarke believes this NYU team has the potential to do something special in 2015.

“I think we played really well today and we were able to finish quality chances from quality passes,” Clarke said. “It’s really motivating to see the team connecting in the final third in more ways than we have seen in the past.”

Like Clarke, sophomore midfielder Steph Ho sees positives that appear to be here to stay for the season. Ho, who continues to improve in her second year after starting all 19 games as a freshman, has a lot of faith that the team’s success this season will have longevity.

“It’s great to see everyone on our team contributing to our success,” Ho said. “Our confidence really showed throughout our entire performance today, which is something I think we can attribute to the momentum we’ve built up from our winning streak. It’s also awesome to see people from all over the field scoring goals — it makes us extremely dangerous and extremely hard to mark.”

The women’s team is headed next to Pittsburgh, Pennsylvania, for an 11 a.m. game against Carnegie Mellon University on Oct. 10. This will be their first UAA road game of the season.

An earlier version of this article was corrected to reflect that Royce Light scored the Violets’ first goal, not Lexi Clarke.