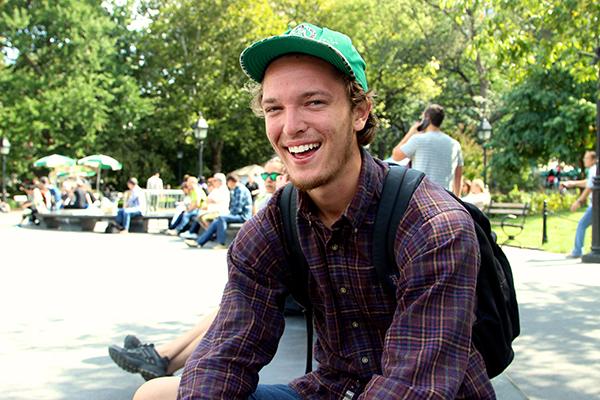 Lucas Doucette is a goalkeeper for the NYU men’s soccer team.

lnitially, Lucas Doucette wasn’t willing to attend NYU because of his love for the West Coast. But, the junior goalkeeper finally came around on the Violets.

“I didn’t actually really think about going to anywhere not on the West Coast,” Doucette said. “I was pretty set on staying in California just because California is amazing.”

However, former Head Coach Joe Behan saw him play at a game and immediately emailed him saying he was interested in seeing him play for the team. Doucette ended up looking into it and visited NYU despite his initial aversion to the East Coast. On his official visit he fell in love with the city — New York would be his opportunity to experience something different. Even though he’ll always be a Californian, New York would be a good place to spend a chapter of his life.

So far, Doucette’s move seems to have been the right choice. He said the team clicks, bonding with each other even off the field.

“Team chemistry is pretty good,” Doucette said. “I love hanging out with them on Saturday nights after a game. Probably one of the best non-soccer related parts of being on the team.”

Doucette said one of the greatest adjustments in coming to NYU was having a different community and team than back home. He also cited his former goalie coach as having great influence on his determination to keep playing, even facing the adversity of being homesick.

“I had this amazing goalie coach who basically taught me everything I know about playing goalie and he made me love soccer a lot more,” Doucette said. “His name is Joe Panian and I think he’s one of the main reasons I stuck with it.”

Soccer will always be a hobby of Doucette’s. He’s thinking of possibly going abroad to play soccer in Germany, not at top levels, but for a lower tier team. Doucette never had the opportunity to study abroad here at NYU due to his program.

Outside of soccer, Doucette is double majoring at CAS for mathematics and at Poly for mechanical engineering. He was going to do art history, but he felt it was too impractical.

“I like working with my hands and I like being active,” Doucette said. “I think mechanical engineering is the best thing for me to do. Math-wise I just did it to do it I guess because I could, and I want to be a math teacher at the end of my life so I can screw with high school students for the rest of my life.”

Apart from his passion for soccer, Doucette is also a musician and theater junkie at heart. He’s a drummer and currently learning the guitar. He said he would love to do theater in the spring of his senior year, but that’ll depend on his schedule when that time arrives. He’s also part of the Christian fellowship InterVarsity on campus. Though he did not grow up attending church, in high school he became close with a Christian group and found that it helped him work through adversity he was facing off the field.

“Christian people are more humble and real,  which is not the reputation Christians tend to have, but at least in my experience that’s how it is,” Doucette said.

Even though Doucette enjoys going to school in New York, this is definitely not home for him.

“100 percent zero chance of living in New York unless I find a job there’s no getting out of. I’m pretty much going to go back to San Diego just because I’m a San Diego kid.”

A version of this article appeared in the Sept. 28 print edition. Email Ashley Arnold at [email protected]