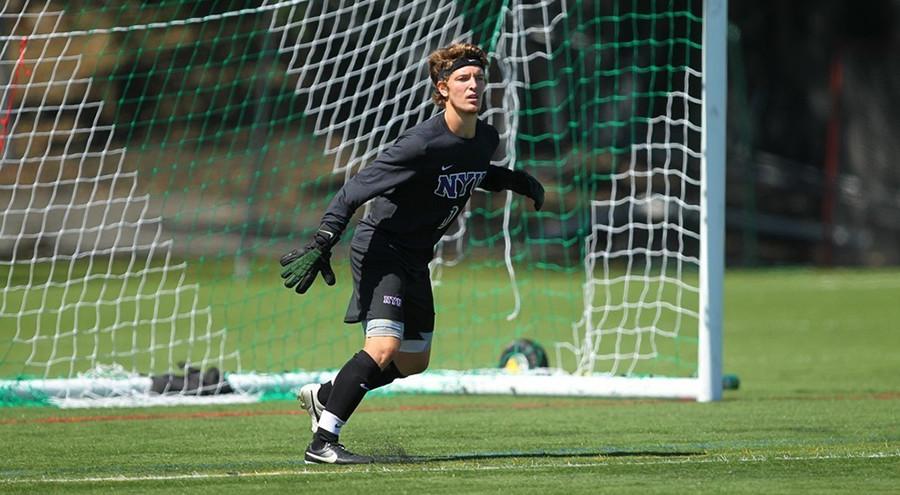 Doucette recorded six saves in the win for his second shutout of the year.

Violet Nation Giveaway Day was a strong showing for the men’s and women’s soccer teams on Saturday, as both teams were able to shutout their opponents and secure wins on their home turf, Gaelic Park.

The women’s team has maintained its momentum from early on this season, as it won its third and fourth consecutive games this weekend. On Thursday, they beat DeSales University 3-1 by finding the net three times before halftime. Sophomore defender Sharon Lee netted the first goal of her collegiate career in the 22nd minute when she roped a shot into the top right corner of the net. Then, in the 24th minute, junior midfielder Lexi Clarke doubled the Violet lead by finishing an assist from sophomore forward Teressa Fazio.

On Saturday, the Violets were able to handle Bard College, picking up their fourth shutout in six games this season. In the dying seconds of the first half, freshman forward Megan Carver passed the ball to sophomore forward Olivia Braender-Carr, allowing her to finish the play for the first goal of the game. In the second half, Carver helped Sophomore Jess Wong score the second goal in the 88th minute. Carver’s assists were the first of her collegiate career. The defense held up for the rest of the game, keeping their clean sheet intact. Junior goalkeeper Cassie Steinberg has been between the posts for all four of the Violets shutouts this season.

The men’s team notched their third win of the season against New Jersey City University by a final score 1-0. Both teams played aggressively, collecting a total of seven yellow cards between the two teams. Both NYU and NJCU fired 15 shots, only six of which landed on net.

Freshman midfielder Inder Sharma was the only player to get on the scoreboard, sneaking the ball past an otherwise solid NJCU goalie in the 97th minute. Junior goalkeeper Lucas Doucette totaled six saves en route to his second shutout of the season. He had to be at his best to keep NJCU forward Theo Sanoh off the scoreboard, as Sanoh led both teams with seven shots overall and four on goal. In such a close game, freshman defender Niko Patrk attributed the Violets’ win to outworking the opponents.

“Our work rate is what got us the win,” Patrk said. “We kept our work rate high throughout the game, and that helped us to finally get the goal we needed to secure the victory.”

The next game for the men’s team will be held on Tuesday night, Sept. 22, against one of its most intense rivals, the United States Merchant Marine Academy. The women’s next game will be held on Wednesday, Sept. 23, in Mahwah, New Jersey against Ramapo College.

A version of this article appeared in the Sept. 21 print edition. Email Ashley Arnold at spo[email protected]