Fashion Underground: The World of Susanne Bartsch opened at the Museum at FIT on Sept 18. 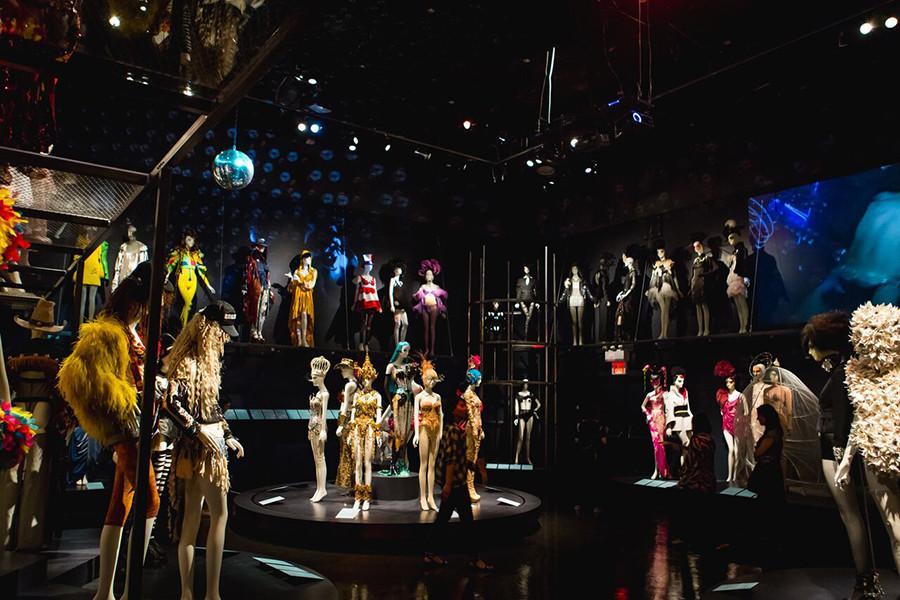 Bartsch was well known on the NYC nightlife scene in the 1980s for the extravagant, crazy parties she threw.

In the midst of a dark room covered in graffiti, a cartoonish figure holding a sign that reads, “It’s show time” welcomes guests to “Fashion Underground: The World of Susanne Bartsch,” the newest exhibit at the Museum at FIT.

The exhibition, which opened last Friday, offers an inside view of event producer Susanne Bartsch’s relationship with fashion. No more than a teenager when she left Switzerland, Bartsch soon became involved in London’s fashion and
music scene.

Bartsch moved to NYC in the early 80s and found the city’s fashion climate dissatisfying. Her SoHo boutique and “New London in New York” fashion show introduced the signature looks of London that she craved in New York. The first room of the exhibit focuses on this introduction of London fashion and pays homage to her store that sells pieces from her favorite London designers, including some of the first designs by Vivienne Westwood to debut in the U.S. These pieces epitomize what Bartsch loved about London’s style — oversized and androgynous.

Hailed as “Queen of the Night,” Bartsch brought people of all backgrounds and sexualities together to form a fashion underground. Curator Valerie Steele explained the influence fashion played in molding this eclectic community.

“The term describes a diverse group of individuals united around the love of fashion, defined as an embodied practice of self-expression and transformation,” Steele said.

Bartsch mobilized the fashion underground by organizing well-attended events inspired by the London club scene at New York nightclubs like Copacabana. Therefore, arguably the most exciting room of the exhibit is dedicated to the London nightclubs which have been a huge influence in Bartsch’s life. The room is adorned with disco balls, pulsating dance music and videos of Bartsch and her friends partying play. Mannequins are displayed high on the walls and rotating platforms, all wearing the eccentric costumes that Bartsch’s parties were known for, such as psychedelic playsuits, Rio Carnival-inspired costumes and a Day-Glo inspired look covered in buttons.

Standing out from the back of the room is a Thierry Mugler bodysuit and the “egg” veil that Bartsch wore for her marriage to luxury gym-chain owner David Barton. Costumes for Bartsch’s “Love Ball” are also displayed, including sparkly and flashy corsets made by Mr. Pearl, who later collaborated with Bartsch to work for major French fashion houses.

In the last section of the exhibition, Bartsch’s often photographed Chelsea Hotel apartment is featured its bright red walls. A display Bartsch’s most recent outfits along with those of collaborations with other designers includes the “JAWS corset” designed by The Blonds, sporting a giant mouth with sharp teeth around a mannequin’s torso. Designers Joji Kojima and Jean Paul Gaultier, who see Bartsch as a muse, also have their looks on display.

A glimpse into Bartsch’s extensive career, “Fashion Underground: The World of Susanne Bartsch” delves into a world of self-expression, positivity and unconventional style that Bartsch has spearheaded throughout her career. The exhibition remains open to the public until Dec. 5.