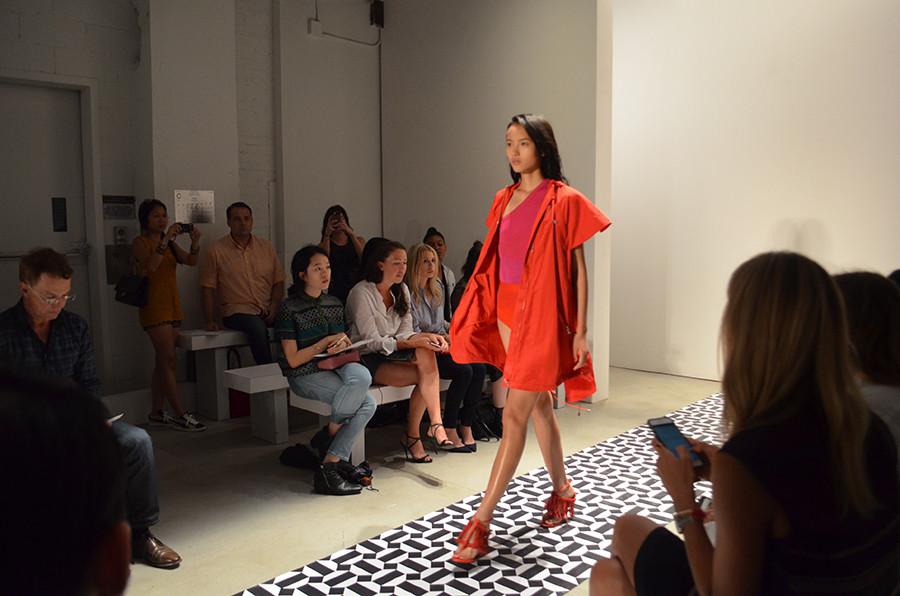 Ohne Titel’s Spring/Summer 2016 runway show opened up with a hard drum beat and strutting models, but unlike in collections past, this season’s clothing moved with the beat as well.

Designer duo Flora Gill and Alexa Adams seemed to stray away from their typical structured silhouettes and clean lines in favor of flowing fabrics and summer metallics.

The show opened up with all-white chiffon that seemed to float down the runway. A simple but sophisticated short-row knit dress in white and red was the transition piece before the next model stunned in a vividly red organza trench coat that soared behind her. The collection continued to throw curveballs with unexpectedly bold hues of magenta and aqua.

The pieces most reminiscent of past collections failed to work with the current collection. A split shoulder dress in navy, green and black was certainly wearable, but looked as if it could have fit into an entirely separate collection of a past season.

The shoes at Ohne Titel could have held down the show all on their own. Suede fringe sandals in neutral tones created a silhouette of constant movement from the neck down, which, at times, was enough to take the focus away from the clothes. The only part of the models that lacked movement was their hair, which was wet and slicked back.
Anything metallic on the runway truly stole the show. Many ensembles were paired with macramé, and chain belts and chokers, which gave several looks an unexpected 90s vibe. The most successful looks closed the show, all of which were composed of chains. A chain and macramé fringe dress was a modern take on the flapper look, and a black bandeau under a chain and macramé vest was the perfect summer look that no one knew existed. It turns out that Ohne Titel just needed a little change—and tons of chains—for a successful spring collection.

Natalia Barr is a Staff Writer. Email her at [email protected]