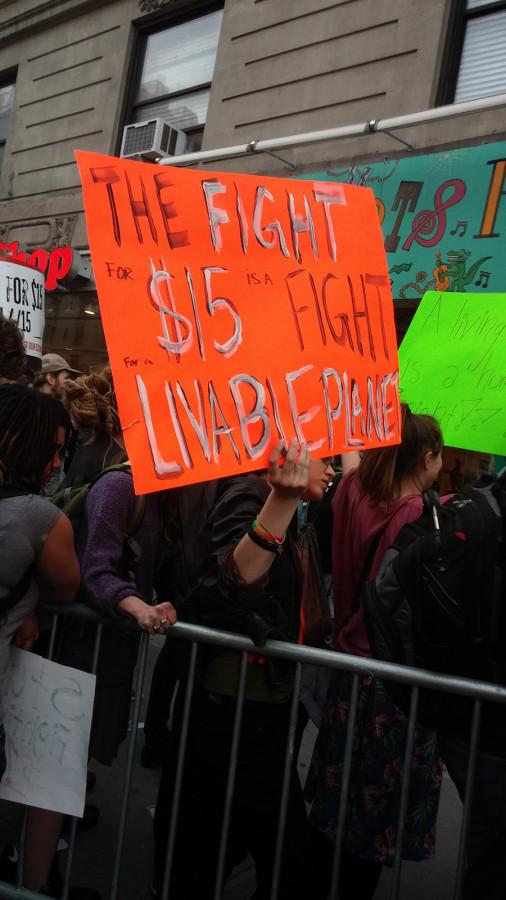 Protesters took Columbia on Wednesday to demand an increase on minimum wage.

NYU students joined forces with college students from around New York City at Columbia University to protest for a $15 minimum wage on Wednesday.

The Service Employees International Union organized the rally in conjunction with NYU’s Student Labor Action Movement. Demonstrators targeted the practices of big corporations like McDonald’s and Best Buy, where workers are underpaid and often work menial jobs for long hours. In addition to campaigning for a $15 minimum wage, the rally aimed for businesses to recognize the rights of their workers to unionize.

“There’s state and federal minimum wages, and around the country many of those wages haven’t been adjusted at all for inflation in decades,” Walters said. “Meanwhile, the cost of living has been going up, and especially in a place like New York what that often means is that fast food and other low-income workers can’t afford to live in the city.”

Steinhardt senior Cayden Betzig said he is campaigning to give people peace of mind.

“There’s a lot of institutes that have put out studies saying $15 is a living wage,” Betzig said. “And what we mean by a living wage is that that’s enough money for people to be able to live comfortably and not have to constantly worry about paying for food or being evicted.”

About a dozen NYU students met up with the rally just as the crowd of about 250 began to march downtown from Columbia. As they moved, making sure to stop and boo any fast food places along the way, the crowd blared their mantra over a pair of drum beats, “What do we want? Fif-teen. When do we want it? Now.”

The protesters set up shop outside a McDonald’s on 96th Street, where everyone from former fast food employees to Amnesty International members shared stories about struggling with low pay.

Charlene Kotei, a Bedford Academy junior working with Amnesty International, said fighting for a living wage is a matter of basic decency.

“I’m a member of Amnesty, and the goal of Amnesty is to fight injustice anywhere,” Kotei said. “The fact that people at fast food companies working all day making chicken scratch just to make ends meet can’t afford to feed their families, that’s appalling.”

A version of this article appeared in the Thursday, April 16 print edition. Email Mike Adams at [email protected]