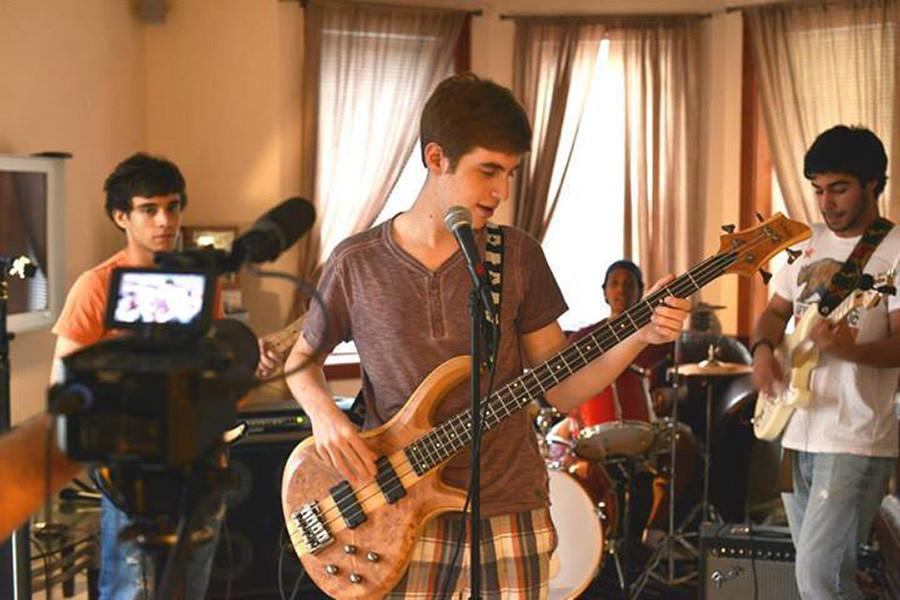 Mike Prussack, center, is an LS freshman in the folk-rock band, Fiscal Cliff.

For LS freshman Mike Prussack, frontman of New Jersey rock band Fiscal Cliff, he frequently finds inspiration in the conventions of the genre, but also tries to create a versatile, diverse sound. A year after releasing their debut album, “Convalesce,” the four-piece is fresh off the release of their latest single, “The Fall.” Prussack spoke with WSN to discuss the folk-rock band’s take on rock music, their new single and how their hometown has influenced their music.

WSN: What are your, and the band’s, biggest musical inspirations?
MP: I’d have to say Paul McCartney. My parents were hippies, so that’s what I was exposed to, and it really turned me on to rock music. As a band, we definitely listen to a lot of Dr. Dog because we all listen to a ton of different music. Notably, our lead guitarist listens to a lot of metal, and then the other guitarist listens to a lot of folk music, so there’s contrast there. We all find a middle ground with Dr. Dog.

WSN: What about your hometown and your origins, in New Jersey, influence you as an artist and a band?
MP: We’re from Hoboken, Jersey City. We end up playing a lot of shows in New Brunswick, but it’s a pretty urban area. The music scene in that area was actually rich and there were so many bands there. It was a cool thing to be a musician. A million bands sprung up, and all of a sudden we have all these house shows going on, and we’re organizing shows in people’s backyards. We definitely borrowed from one another. I don’t know if anything about it is uniquely New Jersey, but the scene there is really deep.

WSN: Your new single, “The Fall,” lyrically deals a lot with contemplating your fate and “falling into the abyss.” What is the meaning behind “The Fall?”
MP: So, the lyrics were actually written by the lead guitarist, Luis. And, for him, it’s about dying and going to hell, which is pretty intense, you know, all the songs that he writes are either love songs or about dying. There’s no in between. It’s pretty intense. “The Fall” is definitely a really intense song, lyrically, about dying.

WSN: What’s it like for you to be a rock band in an era where rock isn’t considered to be on the cutting edge?
MP:  If you want people to remember you, you have to find some way to differentiate yourself. I think what makes us unique is the blend of sound we put together, because we’re not just, like, a rock band, you know? We bring a lot of different styles to each of our songs so that no two of our songs sound too much alike. We’re never going to suffer from “Every-Song-Sounds-The-Same” syndrome.

WSN: What’s coming up next for Fiscal Cliff?
MP: We’re actually planning on putting our full length up this summer, so we’re just finishing up our songs for that. Once we’re out of school, we’re going to hit the studio and try to get it out by July, and we’ll have a release party.

A version of this article appeared in the Thursday, April 16 print edition. Email Kieran Graulich at [email protected]